As far as accolades go for Rock N Roll music, it doesn’t get much better than having the illustrious legend himself Slash, the Guns & Roses lead guitarist not only spinning a copy of your album all around the USA in his tour van, but actually taking the time to let you know he digs your music too; with Slash saying “Great vocals, riffs & groove!”. That is exactly what’s happening right now for Melbourne’s riff rocker Dallas Frasca and their sophomore album “Sound Painter”.

Last week was a great one for the Australian act, Dallas Frasca, which saw them wowing an enthusiastic French crowd during their set at Le Mans 24hr Circuit. The Australian rockers blew the 20,000+ strong crowd away with their stadium-sized performance, and further ignited the countries love affair with the Melbourne three-piece. Earlier this year, the band signed to French record company, Verycords – and have since been labelled by us Europeans as “the next AC/DC”. 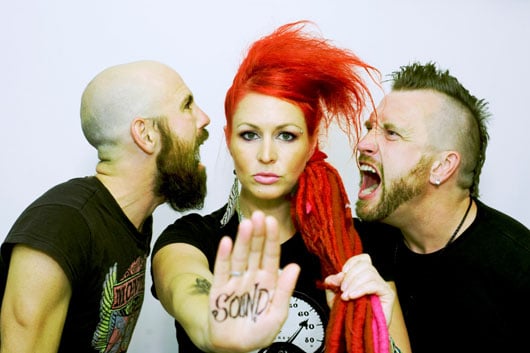 The bands second album, “Sound Painter” was released in Australia in 2012, and has taken the band right across the globe including the UK, Europe, Canada and the USA, as well as supporting a hoist of incredible artists including Thirty Seconds To Mars, Patti Smith, Aerosmith and Billy Joel.

Lead single “All My Love” carved the way, blasting out across Australian radio waves and in 2012 came third for her song “All My Love” in the AAA category of the International Songwriting Competition (ISC) with over 16,000 entries and judged by Ozzy Osbourne, Tori Amos, Janelle Monae, Tom Waits and Basement Jaxx.

Dallas Frasca began to sing at the “late” age of 18, when she discovered her singing ability at a house warming party. Frasca’s career began in 2006, when she won Triple J’s “Light Your Fuse” competition from over 500 entries.

The recent arena show in France has kicked off the bands six week Summer festival tour throughout Europe and will arrive in the UK with a BANG!! This Friday 2nd AUG, the Aussie riff rockers are going to blow the doors off of London’s famous, 100 CLUB @ 9:30pm. If your in London at this time i would highly recommend you go check them out and if your not…well…get down there and show them your support!