We recently caught up with Lucy Hill (AKA Little Lapin), an artist that we discovered during our search for artists to present to Airwaves Festival this year. We were really impressed with her beautiful songwriting, and gorgeous music videos. So, we thought it would be great to get an insight into the mind of this little rabbit, to see what she’s been up to recently!

Tell us a bit about yourself — what elements of music do you get the most excited about?

As a singer-songwriter, most of my excitement stems from the creative aspect of music. Writing lyrics, composing melodies and creating riffs. The performance aspect of music is very exciting too. When I’m on stage singing my songs to a crowd of people, it can feel very surreal and exhilarating. 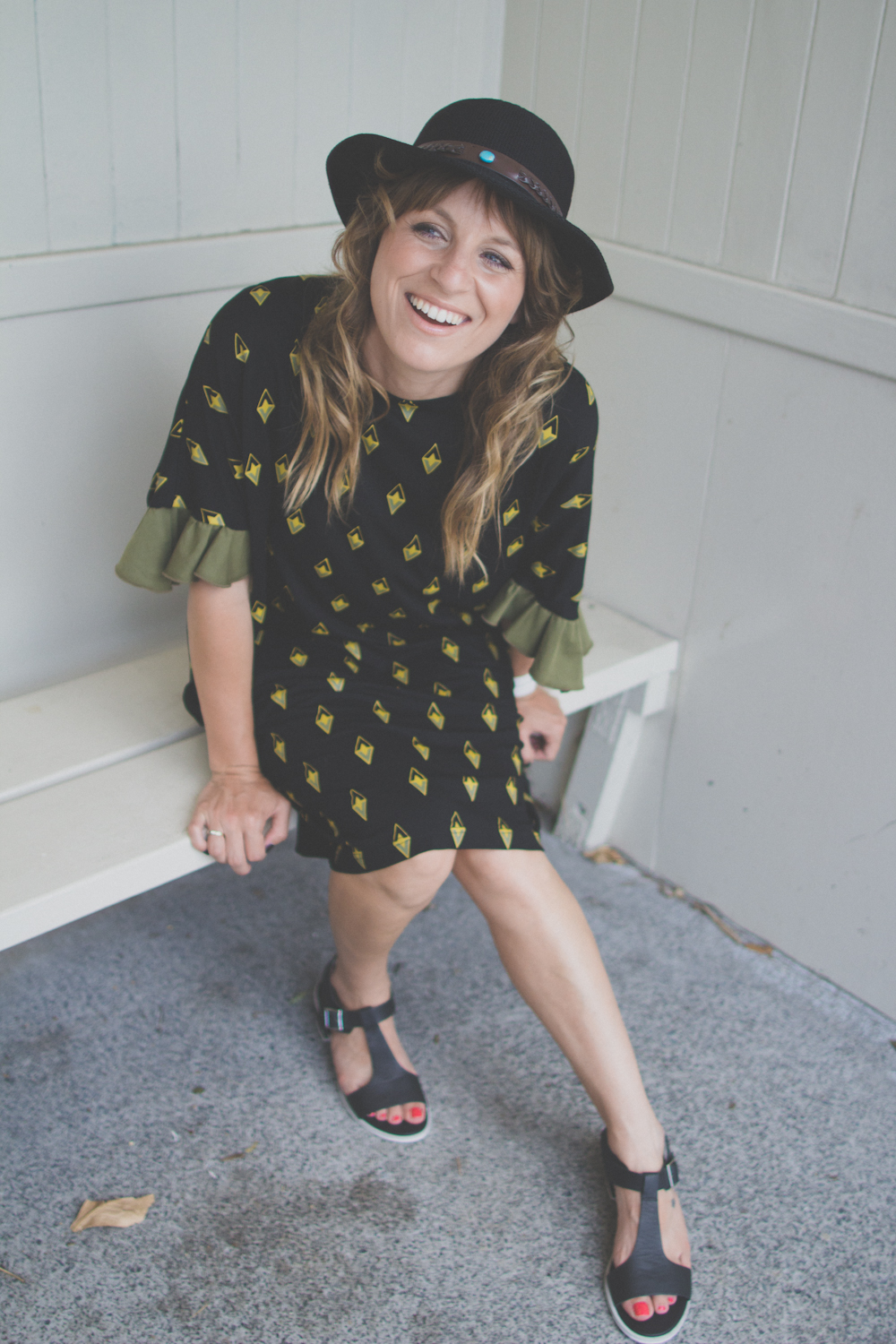 I play in many different formats sometimes with just an acoustic guitar which suits the more stripped back and intimate shows. More recently I have been playing electric guitar which has been so much fun cause I can play around with sounds and textures which has suited the larger venues and festivals. If I am required to perform with a band, I prefer to play electric guitar as I can find that the acoustic guitar can sometimes get lost in the mix especially if I am playing with a drummer. People often comment on how different my live shows are compared to my recorded sound and my response to that is that if you want to hear the recorded version you’d be better off staying at home and listening to the CD.

Who inspired you to start writing music?

I don’t remember anyone in particular inspiring me to write music, it was more that my environment inspired me to start writing music. I grew up on a housing estate which was fun when I was a child but when I reached my teens, there wasn’t much to do in the way of entertainment so I immersed myself in music and art. I would spend most of my spare time in my bedroom composing music on my keyboard.

You mentioned that you started writing with a keyboard, during primary school. What kind of music influenced you during this time?

I was obsessed with the Twin Peaks soundtrack which my older sister had on tape and I would listen to the theme tune over and over to the extent of playing it on my sister’s keyboard which was when I knew I could play by ear. From then on I spent a lot of time composing instrumentals on my own keyboard in the same vein as the theme tune without lyrics. It’s a shame that I wasn’t aware of recording technology back then as I would have had around a hundred instrumental albums by the age of thirteen! It wasn’t until I reached my late twenty’s that I started writing lyrics to guitar-lead songwriting which is how I prefer to write now.

What are you currently working on?

There are a few projects that I am working on at the moment which are keeping me busy.  Next year I hope to release my first self-produced album so I’ve been busy writing and recording new songs and arranging drums, piano, cello and guitar parts on logic pro.  The songs that I have produced are at demo stage so far.  For another project, I’m lending my vocals for indie folk singer-songwriter Frozen Houses who is putting an album together in the near future.  Singing backing vocals has been really good fun and it’s something that I haven’t done a lot of in the past.  I’m so used to being the frontwoman that taking a back seat singing harmonies is a refreshing change.  For the same artist, I am directing a music video and have been working with a small team filming around West Cornwall.  I’ve also been filming some live music video sessions for some up-and-coming Cornwall based artists. Finally, I am rehearsing for my set at Tunes in the Dunes Festival in Perranporth in July which I’m super excited about. I will be performing on the local legend stage with my drummer Kevin.  It will be my first time performing on stage with just an electric guitar and a drummer so it will be exciting to see how that goes down.

Give us an insight into the creation process of your music. Do you seem to follow a pattern when you write, or does it change song by song?

I tend not to follow patterns and it does change song by song.  A few weeks ago I wrote a song unintentionally and it started out with me playing some fingerpicking guitar which sent my baby boy to sleep.  I sat there for a while staring at my three month old’s peaceful demeanor and came up with the opening line, ‘you don’t have to talk you just lay there looking soft and warm’ and at the same time a melody came to my head and as if by magic, the song wrote itself in one afternoon. I have two boys and my eldest is two years old and already half the size of me and I know that not too far away in time,  I’ll be half the size of him so I called the song, ‘Half the size of You’ which is a gentle reminder to myself to try and cherish every moment I have with my family.

How do you balance your music career and family life?

Fortunately I’ve chosen a career which means I can work from home so I haven’t had to make any family sacrifices. Most of my work time involves writing, recording, production and some teaching which I do at home in my studio.  My husband Alex is also a musician and therefore very understanding of the need to create, so we support each other in our endeavours. I’d say the only thing I do miss is playing music with Alex. Before we had our boys, we would play together all the time and Alex used to play lead guitar for me on stage but at the moment it’s very difficult to get the time together to practise so we have to focus on our individual projects. I’m happy that our boys have been surrounded by music from an early age and long may it last.

How do you feel about the current musical climate?

I’m just watching Radiohead perform at Glastonbury 2017 on youTube from the comfort of my armchair and part of me has FOMO for not seeing them live but the other part of me is relieved that I don’t have to contend with the large crowds at Glastonbury.  It’s crazy to think that I can watch Radiohead live in my living room and share the Glastonbury experience without being physically present.  As with any industry, there are pros and cons to living in a digital age and I am trying to focus on the positives such as performing on online music channels like Balcony TV and Sofar Sounds which connect you to a worldwide audience.  Another positive aspect of living in the digital age is that you can discover new music and be discovered on music blogs.  With so many genre specific music blogs available, they can really help independent artists in the way of promotion so I think that there has never been a better time for independent and unsigned artists to get their music heard.

Where do you go to find new music?

Usually through 6 Music and most of the time they get it right.  Some new bands they’ve introduced me to are This is the Kit, Warpaint, Alvvays and Haley Bonar.  BBC 6 Music DJ’s Steve Lamacq, Gideon Coe and Tom Robinson have also been very supportive of my music featuring my songs Waiting Room, Magnet Eyes and Californian Sun on their shows.

How do you think that a site such as Music Gateway, can impact how the industry works?

Music Gateway is beneficial for musicians that don’t have time to network or have contacts in the music industry.  It’s an effective way of connecting music makers with decision makers and I think it’s more professional than using social media.

What brought you to Music Gateway, and what do you mainly use the site for?

I found Music Gateway through Music Network Pro and mainly search for film and TV placements.

What has been your career highlight so far?

So far, the whole journey has been my highlight.

What are your plans for the future?

As I mentioned before, I would like to produce my next album and maybe attract some label interest so that I can record the songs professionally in a studio and give the songs the treatment they deserve.  Having toured extensively throughout New Zealand, Europe and the US as a solo acoustic act, I’d like to do some more touring but with a band in tow.  I’ve recently gone electric so I want to have some fun playing with guitar pedals and work on my live sound.  In the near future, I would like to compose more songs on piano and try and get a bit closer to realising my childhood dream of writing music for film.  I would like to collaborate more with other songwriters and musicians and write songs for more established performing artists.

What advice can you do for someone just starting out with production, like you?

What have you learned that’s been the most valuable? Less is more and it’s all about the song, you can’t polish a turd.

There seems to be a large push towards a hybrid of acoustic and electronic equipment recently, specifically within the singer-songwriter circles. What does this mean for you? What inspired you to start using pedals?

I wanted a cleaner sound on stage because more often that not, my acoustic guitar doesn’t sound the way I want it to and when I play with a band I can’t always control the way it sounds in the mix.  I also think it’s fun playing with different sounds and textures through pedals and when you’ve been playing acoustic for over seven years it’s a welcome change.

How will you go about finding a band? Is Music Gateway something that you may consider for such an endeavor?

I’m always on the lookout for session players and I would be open to holding auditions for Music Gateway members. Currently I’m looking for a lead guitarist, bassist/double bassist, cellist, keyboard/synth player who can sing harmonies. Anyone interested?

Lucy has created a project for this search for band members, which you can find here.

If you could impact the world in one way, what way would you like it to be?

I hope that through music, I can inspire people to try and be the best versions of themselves.