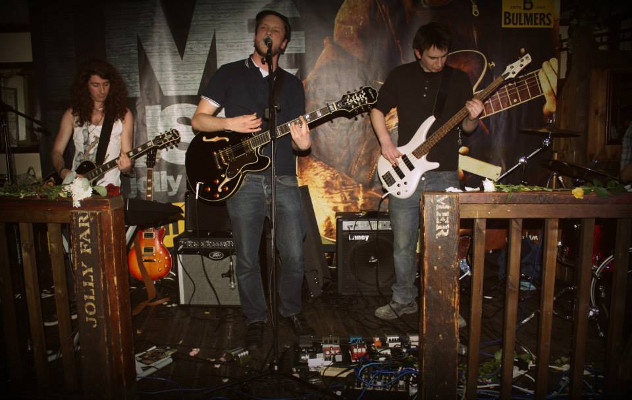 Tell us a bit about yourself and your career so far?

Well I’ve been writing songs since the age of 14 and it really just started as a way to kill boredom. A knee injury stopped me from playing football so I had a lot of time on my hands. When I moved to Portsmouth at 19 I started playing regular gigs and spent most of my time working in a recording studio, getting to grips with the production side of things.

I used to take a sleeping bag into the studio with me and camp out there for days at a time. I developed a pretty intense work ethic that’s stuck with me to this day. I spent 4 years there, released some material and ended up headlining a few shows that were streamed to thousands of people, earning a review in NME magazine. That was the period in my life that really showed me that music was a viable career choice.

“I used to take a sleeping bag into the studio with me and camp out there for days at a time.”

I moved back to Devon in 2012 and started the group Still The Mind. I was blessed to be able to work with some of the finest musicians in Devon, and in my opinion in the country; Joe Warriner, Karl O’Neill and Phil Hallwood. We worked hard for a solid 3 years, recording an EP with producer Digby Smith (Led Zeppelin, Paul McCartney, Bob Marley) who I learned a lot from. My only regret is that we never recorded an album despite having over 20 songs. We bowed out by winning a Battle of the Bands in 2015 and from there I went solo again. I released an EP through the Animal Farm record label in London and learned a lot there too. I worked with Mat Leppanen, another great producer and a really funny guy – does an amazing Donald Trump impression.

You completed a project on the site can you tell us a bit about the creative process and the outcome?

John Duffy sent through some lyrics he’d been working on that had developed a lot of interest, the piece was titled Grief Unfurled. I picked up my guitar and just went on instinct. Then I pressed record and put the music and melody to it within a few minutes and that melody was largely unchanged for the final piece, John was very happy with it. I think we both knew that it was a piece that needed the care and understanding of someone that’s experienced the pain of losing someone close.

What advice would you give to those looking to collaborate on Music Gateway?

I would say just get out and collaborate as much as possible. Challenge yourself and take on jobs that are outside of your comfort zone. It won’t always work out but it will help you to improve as a musician and in the long run will open the door for more opportunities.

What are you looking for when you collaborate with other artists?

Something that challenges me and pushes me to improve, and ultimately something that I find fun to work on. I think it’s important to be happy in your work because it’s always reflected in the quality.

“Challenge yourself and take on jobs that are outside of your comfort zone. It won’t always work out but it will help you to improve as a musician and in the long run will open the door for more opportunities.”

If you could collaborate with any artist (past or present) who would it be?

There’s so many that I would love to work with from many genres – Jackson Browne, Bob Seger, Sturgill Simpson, Richard Ashcroft, Nile Rodgers, Noel Gallagher – all writers that I admire greatly. But if I had to name one artist I would say Tupac Shakur. He was the dominant voice of my youth and instilled that work ethic in me early on. His music raised me, I don’t think I’d be the person I am today without it, in fact there’s a good chance I wouldn’t be here at all. I owe that man a lot!

What’s your favourite thing about the site?

It’s a great way to connect with other artists that I normally wouldn’t have the chance to. It’s connection between artists that drives the music industry and the site allows you to do that in a clear and easy way. There’s always multiple opportunities spanning a wide variety of genres, so there’s something for everyone and it’s updated daily with fresh ads. There’s so much activity on the site that’s it difficult to keep on top of it all, so having the relevant opportunities emailed to you is a great help.

What’s next for yourself any big projects, tours etc?

​​I have a few things in the pipeline:

– I’m working with John Duffy on another project called The Doorway, that should be finished in the next few weeks.
– I’ve also been working with Dominic King, a fantastic songwriter and a music industry veteran. He’s been mentoring me as a writer and is currently helping me get songs placed with some major artists.
I’m recording a solo album ‘Shadows On The River’ that will hopefully be released early next year on my newly founded record label; Pavement Poet Records. A single ‘Coming Home’ will be released sometime in the next month, featuring the incredible Ian East on saxophone.
– Finally, I’m putting together a script for a TV show. it’s still early days but it tentatively has Dr Rick Strassman (DMT: The Spirit Molecule) attached as a consultant. He has offered to help out should the pilot get picked up, I’m hoping to make significant progress in 2018.

Want to collaborate with artists like Matt? Check out the opportunities we have on the platform here.​​