Spotify is Finally in Profit! Is Streaming the Pioneer of the Future?

Within the last century we have seen a lot of change in how music is listened to.  We’ve gone all the way from phonographs and vinyls to tapes and CD’s, and now we have online streaming. Usually when a new medium comes along it brings along the death of whatever medium is popular at the time, like tapes replacing vinyl, then cd’s replacing tapes. In more recent years we have seen the rise of online music streaming sites such as Soundcloud and Spotify.

Now we live in an interesting era. As online streaming is starting to make a profit, will it now take over as the most popular medium for music listeners? Right now Spotify is available on Android, BlackBerry, Boxee, iOS, Linux, MeeGo, Microsoft Windows, Openpandora, OS X, Roku, S60, Samsung Smart TV, Sonos, Squeezebox, Telia Digital-tv, TiVo, WD TV, webOS, Windows Mobile, and Windows Phone. While digital radio can also be found on these platforms, what applications like Spotify offer the user is complete control over what they listen to. 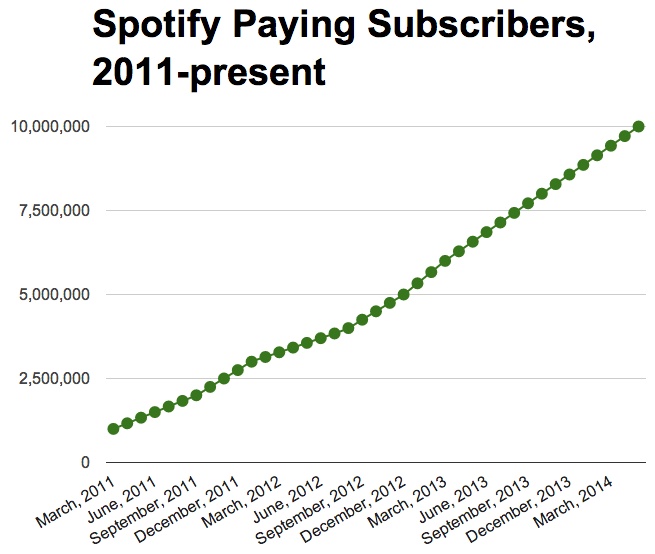 As well as providing good service to the listener, Spotify also guarantees that money goes to the artists as well. Like the radio, Spotify has to pay the rightsholder when a song is played. Now that they are making a profit, there is potential for even more money going to the artist. This can be seen as Spotify’s payouts to Merlin’s (a music rights agency) 10,000-plus indie labels rose 250 percent from the year ending March 2011 to the year ending March 2012. Also, the revenue per user (RPU) “has grown significantly alongside the overall revenue growth and is currently the highest it has been since the launch of the service,” said Charles Caldas, CEO of Merlin. “We see consistent, ongoing growth on revenue per user, revenue per stream, and the total revenue the service brings.”

Spotify now has a sustainable business model, which will guarantee more labels and artists will want to work with them. Another factor that will encourage people to join Spotify is that in the long term artists can make more money from their listeners streaming their music than if their listeners buy a CD or download it from iTunes.  A la carte services are one time transactions whereas streams are on-going. Just think, how many times you’ve listened to your favourite song, and then think about everyone else that likes that song, dds up doesn’t it? Once a fan buys a CD or songs off iTunes, there will be no more payments to the artist and label, but if they don’t own the album and constantly streams it on Spotify, the artist and label will get paid every time.

As well as bringing the death of CD’s and iTunes, Spotify may also put an end to music piracy. Since it is now quicker and easier to search for a song on Spotify and be able to listen to it instantly, compared to spending ages trying to torrent a good copy of the song. This should encourage artists and labels to put their songs on Spotify, to discourage users from pirating their music.

While it is now too early to tell if Spotify will take over as the most popular medium of music listening, there are signs to show that this may happen in the near future. If you disagree or have more to add to the discussion, feel free to leave a comment!