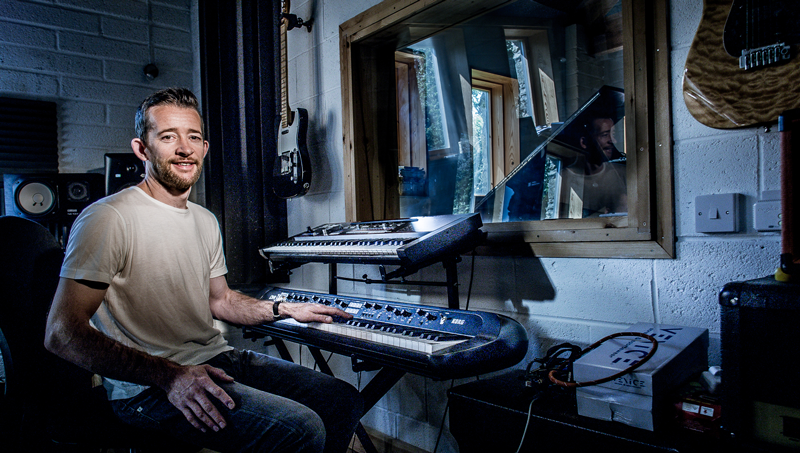 Music tells a story. So does songwriter Mark Newman, a 21st Century storyteller fusing pop music with universal themes of love, hope and heartbreak. His honest lyrics and hypnotic melodies have caught the attention of industry professionals and audiences alike.

Mark is used to being a storyteller, but now the tables have turned and he will be the focus of our story. He told us that he was 15 when he started playing and writing music. However, his desire to make music was rooted from much earlier in his life:

“Some of my earliest childhood memories are the joy of hearing music on the radio, and I still get that same feeling today.”

More inspiration and influence for Mark comes from listening to artists such as Frankie Valli, Harry Nillson, Karen Carpenter, George Michael, Freddie Mercury and many more.

“I believe there are also some great artists who have emerged in the last decade such as Bruno Mars with his incredibly soulful sound. Adele, with an almost timeless quality to her voice. For me, she sounds like a modern-day Dusty Springfield. Ryan Tedder has done some great things on both sides of a mixing desk as writer and producer in addition to his work in “One Republic” to name a few.”

Mark grew up in a small village in Kent, so there wasn’t a massive music scene “Sure there was a local live scene, but it wasn’t like growing up in Manchester in the early 90’s for example, who had the whole indie phenomenon.”

“I was very lucky though to live fairly close to London, so there was still the opportunity to watch a lot of great bands.  From there I started playing at some of the venues that were happy to host writers nights.”

As if the universe is trying to reward Mark for trying to get out there and find music, he’s currently working together with established Nashville Producer Scott Gerow, writing for artist and sync placements. They work together under the artist name ‘Stave Traders’ featuring a selection of rising American vocalists. Their infectious blend of fragile pop songs and contemporary production packs an unforgettable emotional punch. In 2018 their music has been featured on BBC Music Introducing which has led to the release of ‘Love On Me‘ via iTunes and major digital platforms.

We wanted to know from the master storyteller whether telling a story through songwriting is a sure-fire way to produce quality music and after some laughter, Mark agreed that it certainly helps.

“I think songwriting is really about trying to capture a moment and all the emotion that goes with it. A great song can literally put the listener in the room with the artist.”

A great example that Mark gave of this is ‘Without You’ written by Pete Ham and Tom Evans of Badfinger. “A three-minute movie if you will.”

So how do you write a story in a song? Mark has managed to refine his songwriting method over the years. He told us that when he first started out, he didn’t really have a process. He’d just sit at the piano and start playing. “And there’s nothing wrong with that, there really are no rules.

“Over time I’ve discovered I seem to get better results picking a line or a phrase to really focus in on and writing the whole emotion and message of the song around that. Twisting well-known sayings into something unexpected can be a great way to start, or better still, coming up with completely new ones.”

He also tries to stick with this same process every time as he feels that it gives him a really strong focal point to bring the lyrics and the melody back to.

Another great tip that Mark would like to share is to make sure that the song has an attention-grabbing title. “I’ve read about music supervisors and publishers saying if a title peaks their interest, they’ve simply got to hear it. Sam Smith‘s ‘Way Too Good at Goodbyes’ is an example of a great title that makes me want to know what the song is about.”

After thinking of a good a title like that, Mark will try to play out who the characters are. He’ll figure out what the most interesting angle is to approach the story etc. and irons out all the little details before starting to write the melody and lyrics.

As you probably well know, streaming and digitalisation are topics that are spoken of very frequently as we all feel affected by the changes that these have brought. Mark agrees, saying that this has “changed the landscape of the music biz forever.”

He feels that the changes have impacted on songwriters harder than anyone else.

“There are fewer sales and more people fighting for a piece of the action. When you read six or seven names next to a song title, that’s tough.”

But every story has light and dark, and Mark can see the positive side in this streaming story too.

“It’s hard to be completely negative about the changes because there’s a platform for artists and writers to be heard which simply didn’t exist 30 years ago. It’s certainly not easy but there are plenty of talented writers still managing to find their way through the noise.”

We asked him for his honest opinion on whether he thinks Music Gateway can help and this is what he said:

“For me, Music Gateway is a fantastic leveller, because it allows unknown artists who don’t have the weight of a big machine behind them to pitch on recording projects, sync opportunities and co-writes that would otherwise never be available.”

“It also allows artists, writers and producers to reach out and find like-minded collaborators far easier than they may have done previously.”

One last tip from Mark is to “take the positives from every rejection, challenge yourself to keep on learning, and just keep going. Tenacity is your friend.”

If you’re a songwriter hoping to follow in Mark’s footsteps or work alongside him, then you should check out his current project here.

If you’d like to find musicians, producers and other talent to collaborate with, you can create your own project on Music Gateway.