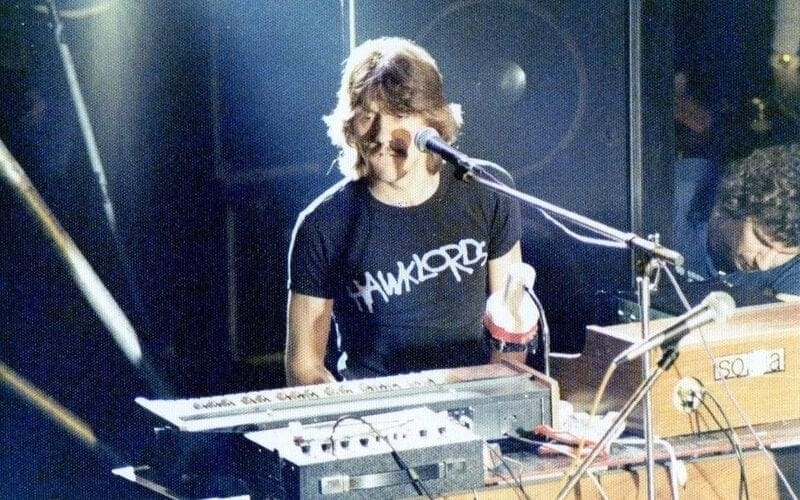 Meet Steve Swindells. Steve has had a rollercoaster of a journey to get to this very moment of getting a sync placement in the film, Moffie. Success through Music Gateway! He’s very kindly shared his story with us and we think you could learn a lot about being signed, dropped and never giving up!

First of all, tell us a bit about yourself and how you got into music. What’s your role in the industry?

I’m 66 years old and grew up in a village near Bath. (I’m going back to live in Bath next week, where my studio will be in a summerhouse overlooking the canal).

I went to the West Of England College Of Art in Bristol, but dropped-out, aged 18, to join my first band, Squidd, who played rock versions of classical music ‘hits’. I played a Farfisa organ and the vibraphone. In 1973, I moved to London and landed my first publishing and record deals within a few months, with Chappell Music and RCA Records respectively. My first album ‘Messages’ featured musicians from Elton John’s band, Roxy Music and King Crimson – along with a full orchestra on several tracks.

Soon after I finished my second album, my manager/producer swept everything off the desk of the CEO of RCA records in a drunken/druggy rage. End of record deal. Messages was remastered and reissued on Esoteric/Cherry Red in 2009, with a bonus CD of my ditched second album Swallow. In 1976 I joined the hugely successful pop group Pilot as keyboardist. I found myself recording what was to be their final album, Two’s A Crowd (produced by Alan Parsons), in the legendary Studio Two at Abbey Road.

I joined Hawkwind in 1978 and played and sang backing vocals on their seminal album ’25 Years On’ (released under the name Hawklords). We undertook a 42-date, largely sold-out tour of venues such as the Apollo Hammersmith. The band covered my song ‘Shot Down In The Night’ in 1979 (they still perform it).

I’d left the band after an Italian count offered to take me to New York City, where I landed a major deal with Atco/WEA (now part of Warner Music) within three days. I was signed by Doug Morris, who is now *gasp* the President of Sony Music! I was also signed to Trinifold management – who looked after The Who (and still do). In 1980, Atco/WEA released my ‘Fresh Blood’ album to rave reviews and it reached #3 in the US airplay charts in its second week of release.

Later that year I recorded 22 songs for the supposed follow-up album in just four days!  Musicians included the Big Country rhythm section (who were later to be part of the Live Aid ‘house band’ at Wembley) and Simon Townshend (Pete’s brother – now also playing with The Who). This is when ‘Martyrs And Madmen’ and ‘Fall Of The Empire’ (the two songs featured in ‘Moffie’) were recorded.

What A Rollercoaster Ride

In 1981, I was inexplicably dropped by both management and record label, despite the obvious quality of the demos. I could only conclude that it was because of their homophobia, as I’m out-gay (but not a queen). Roger Daltrey, the singer of The Who, subsequently recorded four of my songs in 1983 (including ‘Martyrs And Madmen’), with me on keyboards.

These sessions were finally released on Flicknife Records as a double CD, ‘The Lost Albums’, in 2012. ‘Fresh Blood’ was remastered and reissued on Atomhenge/Cherry Red in 2009.

My first album ‘Messages’ is still waiting in the digital queue to get on Spotify, Apple music etc, but the rest of my eight albums are on all the major digital platforms.

Having been dumped, I reinvented myself as a club promoter and party organizer in 1982. This is when I created several ground-breaking club nights (including London’s first-ever open-mic night, ‘Downbeat’, in 1985) and became very successful. I organized parties for The Face and Time Out magazines, Warner Music (how ironic), Prince and Madonna. I never, however, stopped writing and recording. You can find most of this prolific output on my recently self-released albums. Just put my name in Spotify, and they’ll all pop-up.

Other musicians that have recorded with me include Guy (Pink Floyd) Pratt, Dale (Amy Winehouse) Davis and Winston (Massive Attack) Blissett on bass and Jon (Culture Club) Moss on drums.

This is pretty much my first sync, certainly for a feature film. I did the music for a documentary in the late 70s, and some incidental music for the EMI DVD of the UNHCR ‘Voices For Darfur’ charity concert at The Royal Albert Hall in 2004. This is where Daniel Pearce sang my song ‘I Feel No Pain’ with The Royal Philharmonic Orchestra and the London Community Gospel Choir

Very excited, particularly when I discovered that the South African director Oliver Hermanus won the Queer Palme D’or for ‘Beauty’ in 2011, and ‘Moffie’ was to premiere at the prestigious Venice Film Festival! FYI: ‘Moffie’ is a derogatory word for gays in South Africa.

Are you planning to watch the film?

Hell yes! I can’t wait to see how he’s used the narrative of the songs in the context of the film. The lyrics are very poetic, but also politically robust.

I’ve been a member for 15 months, and I love how friendly and accessible the company is  – great customer service. I just wish that Dave Stewart [Music Gateway Ambassador] had gone for our ‘remote co-write’ with ‘Wifi’.

What would be your top tip to anyone trying to secure a sync placement?

Get into the soul of the brief.

What are your plans for the near future? Anything else you’d like to add?

Setting up my Summerhouse Studio in my mum’s beautiful garden in Bath. Looking forward to getting LOTS more syncs!

Would you like to follow in Steve’s footsteps and get a placement? You can find sync success through Music Gateway! Just make sure to sign up and submit your music to the Sync Portal! Start your 14-day free trial today.