Shooting the Video – Part 3 Video on a budget series

Although we had permission and clearance for two days of shooting at our location, our goal was to complete all shooting in a single day, starting at 7 a.m. We had everything prepared the night before shooting so that we were ready for almost any possible hitch; rescheduling to the next weekend wasn’t possible as we were working to the filmmakers busy schedule, so we really only had one shot.

Unfortunately for us, Mother Nature was not so determined, and we were blessed with an un-forecast blizzard when we arrived. The heavy snow fall was unexpected, but we really only had to decide whether to film with it or to call off until the next day. In reality this wasn’t much of a choice; we were determined to film on our originally scheduled day, snow or no snow. 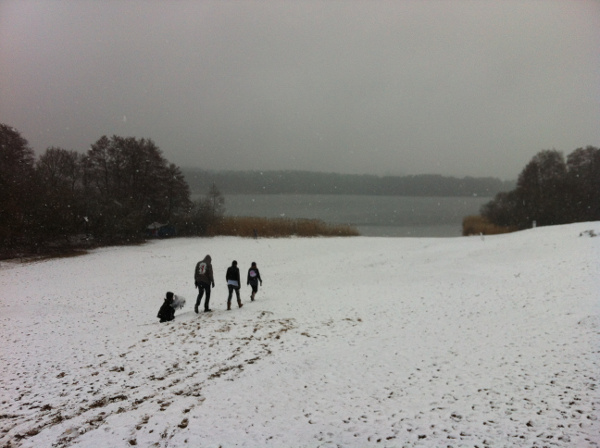 So we chose to film with it, and utilise the snow to whatever effect we could. Luckily, we’d prepared for rainfall, and had some waterproofing ready to handle it.

Our most valuable equipment was our camera, so our Filmmaker provided waterproofing and cover- it’s extremely important to have plastic covers for equipment, and tarpaulin to cover anything that needs to be put to one side. We also brought a small, easy to set up Gazebo we had borrowed in order to store and keep vital equipment out of the weather. We set this up discreetly to avoid it being seen in shots, and used this along with a selection of camping chairs in order to keep our cast and crew out of the weather.

In addition to making sure the camera was sufficiently waterproofed and protected, any members of our crew who were not required for shots took over roles as camera assistants, including holding an umbrella over the camera to avoid snow falling on to the lens, providing towels and plenty of food and cover for the actors. 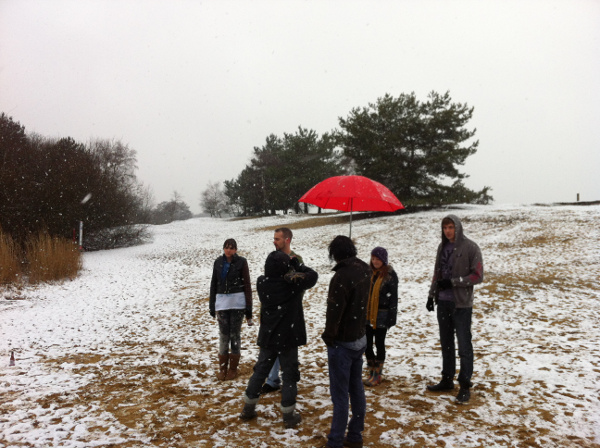 Unfortunately the location we had picked meant that we had to set up quite a distance from our vehicles and any facilities, meaning it was up to us to keep ourselves warm and dry. We half succeeded, but as we also needed to shoot in the snow, it became an uphill battle to keep everyone comfortable. In the end we mostly resorted to keeping moving, regularly taking breaks to have a quick jog around the beach or a round of spontaneous dancing. We also had the secret weapon of a thermos of tea and coffee for when our feet were turning into ice. Never underestimate the importance of a hot drink in the snow.

Whilst the snow definitely brought some welcome atmosphere, it came with a lot of potential disasters.

We had to adjust some of the original shot list due to the adverse weather conditions; in particular we originally included a shot of our lead actor buried in the sand which he would rise out of; however the snow fall made this impossible and unsafe.

Continuity became a huge issue. Because we had chosen to film in the snow, particularly during a period of heavy snowfall, it meant we had to shoot as quickly as possible to keep the levels of visible snow consistent between shots. This was another reason the shot with the lead actor being buried was eventually cut, as it would be extremely difficult to keep our continuity straight.

We adapted the sequence to move into reeds by the lakeside to create a similar out of place symbolism which wouldn’t put our actor at risk of hypothermia.

In the end this piece of improvisation worked out particularly well in terms of incidental (i.e additional) shots as we were able to include a few great images of hands passing through the reeds.

Our big risk factor was also our money shot; the image of the lead actor walking into the lake. 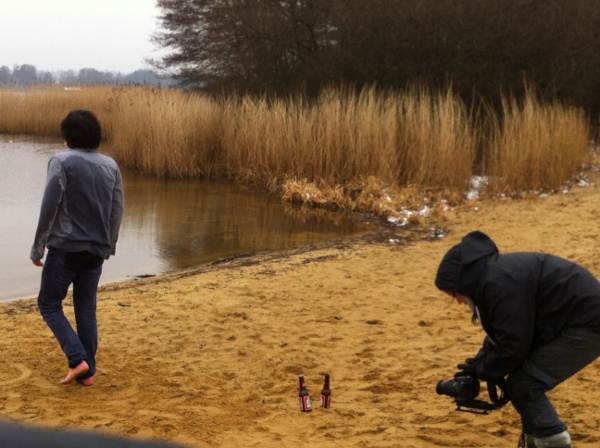 In an unfortunate twist, due to the snow outside the water in the lake was actually warmer than the air. However we had to take extra precautions to make sure that our actors’ health and safety were not jeopardised. A foil blanket was readied along with towels, blankets and fresh clothes. A car was heated up and a warm beverage prepared, alongside advice from health professionals and on call medical aid. Thankfully the shot went off without a hitch due to our cast- we had one go at it, so it needed to be perfect.

In the end only a few shots were improvised and changed, and we were able to stick mostly to our shooting schedule. Some extra footage was gathered; primarily additional close up shots of the cast and some other incidental and establishing footage of the location. This meant plenty of shots of the reeds, the lake, the shoreline etc. As I’ve said before, more footage is always better than less, so any extra footage our filmmaker could gather was better.

We scaled back our original time frame- to be finished by 5.30 due to light changes- back to 2pm to avoid continuity issues, and also losing our digits to frostbite. In the end we left location at exactly 2 pm.

For all of the complications it added, the snow actually helped us to cut one major corner; we didn’t need to provide additional lighting because the white reflected large portions of light for us. A few small silver linings, anyway!

We hope you enjoyed the series from Hana and her team and please do feel free to share round.