THE MUSIC INDUSTRY IS DEAD! – Well not really, see just how you can benefit from the online world… 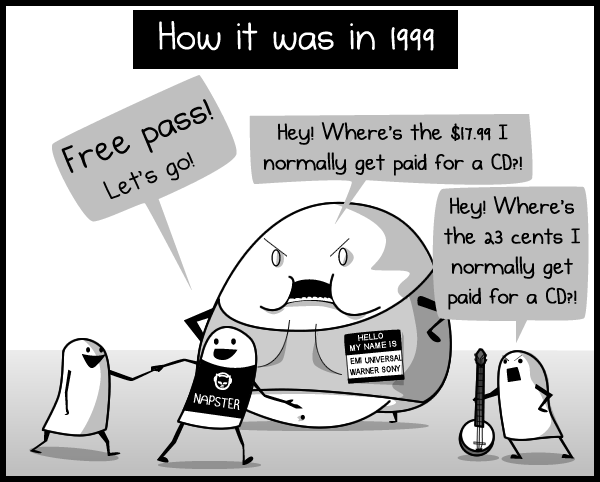 Declining record sales, lack of value in music, nobody pays for music, a dead music industry… shall we just call it a day, go on a nice holiday and stick our heads in the sand? Well that’s what everyone wants you to think. But it’s okay, come here and I’ll make it all better and tell you just how the music industry is now better than ever. Did I just say ‘better’? Yes I did, it may be hard to believe but if you really do look at the industry and how it is now you’ll notice that are many opportunities for musicians out there due to the online world that you can benefit from and that the music industry isn’t going to crash in our faces.

So, lets take a look at the music industry today. It paints a very different picture to how it did in the 80‘s and 90‘s with the main influencer being the domination of the online world. All you hear nowadays is that no-one pays for music anymore and musicians have no ways of making income. Well this isn’t entirely true. Their is a better legal alternative to P2P file-sharing which many are seeing the benefits of. Yes you may have guessed this already and hear a lot about them (so I won’t ramble)… I bring your attention to streaming services (Spotify, Deezer, Rdio).

Consumers are making the shift from P2P to streaming models. Don’t believe me? Well I’ve done my research and my good friends at BPI have collected these very positive figures!

20% – Proportion of Spotify’s Global users who are paying subscribers

These figures show there is an adoption to streaming services present, it may not be the whole population of music lovers yet but it is certainly making headway. More and more music lovers are choosing legal alternatives over illegal methods and whereas it may only be 20% of users subscribing to Spotify it bursts the bubble that nobody pays for music anymore… because they clearly are.

There are 22,000 visitors to YouTube every month! How can YouTube help me? Well it is both a discovery tool and income source. The video streaming platform lets you put up your content for free, expose your music to millions without forming any barrier to entry for your potential new fan and allow you to profit from that. Yes, you can make money from YouTube. It is much like music streaming as it only makes serious money when your views are in the high thousands but this does pay off. 1000 views on YouTube with enabled ad-sense (these are the adverts at the beginning of your video that you make money off) will equal to an average of $7/£4-5. When this adds up to 100,000 views (as if marketed right your video might!) you are looking at $700. Depending on your views total obviously depends on your popularity. $700 may not seem a lot to a band like Kings of Leon but to that new buzz band on breaking point this money can certainly help! As mentioned before, musicians such as Alex Day is benefiting from utilising YouTube – read here.

This is something entirely new which without the domination of the online world wouldn’t have even been possible (at least not to the same success rate!). It is important to remember that this business model isn’t about asking fans for money essentially, I mean you are but don’t make it obvious! You want to go with the angle of ‘You can get involved with our band journey and help fund something epic!’ which is still true and much better than saying, ‘We need your money!!’. A secret to a successful campaign I would personally say is a great introduction video to the campaign. Fans love visual content and it will show your personality as an artist/band in a much better way and reach out to your fans hearts. Emotion is the main driver for them to get involved in the project; it’s about getting them to want to help you.

Crowd-funding is based on offering a fan experience with a number of incentives to give money. The bottom incentive could be to pre-order the new album lets say, if the campaign was to fund a new album, then this would increase to more money for signed merchandise, personal YouTube video messages addressed to that fan, meet and greets, breakfast with the band etc! Anything you could think of, but do remember you have to be able to do everything you say. This was found out by Amanda Palmer when she was suddenly touring around the world to give personal live shows which did incur travelling costs!

So yes this brings me to an example of where crowd funding really does work, Amanda Palmer. The singer raised more than $1 Million through crowd funding. An impressive amount! If you want to find out more about her then search on Google as I could go on for pages about her, but it really is innovation at its best and as long as you have a fan base it can work at any level. My advice is just to be realistic with your funding target and what you offer to your funders as prizes/rewards!
Crowdfunding is great as it allows you access to funding without the need for a record label. It is clear that musicians can definitely do more of a DIY approach due to the internet.

For example, yes there is Music Gateway. Without the Internet our job would be a lot harder and we wouldn’t be able to connect you so easily with all the other users signed up to us and make you aware of the new project opportunities available to you in the same way! I do believe it is important to focus on the benefits that the Internet has brought to us in the last decade rather than the dis-advantages. The music industry in my eyes is not in a period of decline, more change. The ‘record industry’ yes that is in decline as more consumers buy less physical product but ‘the music industry’ – that’s a whole different board game and guess what? We’re winning.