Best Anime Theme Songs Of All Time: Our Top Favourites

Anime is one of the biggest genres of TV and film in our world. Known for bright and brilliant animation, often wacky plots, and loveable characters, anime has some of the most recognizable sounds and looks.

Within these shows and films, the title sequence and songs are incredibly important, as they set up the tone for the show and give a sneak peek into the episode and seasons’ plot. A lot of anime theme songs have become massively popular beyond the series they are tied to, and for good reason!

Anime. We’ve all heard of it. But what is it?

It is defined as a style of Japanese TV and film animation. It caters to adults and children, and the shows that fall under the genre span many genres of stories. Within Japan, anime is a term used for all animation despite where it came from, but outside of the country, it generally means Japanese animated shows or films.

Most shows and movies in the ‘genre’ have identifiable and catchy theme songs – or OPs as they are sometimes called. OPs refers to the opening songs with credits at the beginning. These often change between seasons of a series, too.

The Most Iconic Anime Theme Songs

The genre is huge, and there are so many soundtracks to listen to that are all amazing! Here is our curated list of the most well-known anime theme songs from some iconic shows.

Sailor Moon is the most notable female-led anime of all time. Generations have grown up with it, and many look up to the characters.

The iconic song in question is ‘Moonlight Densetsu’. The soundtrack to season one of the show, the song has become rooted in fans’ hearts since day one. There are both English and Japanese versions of the song – both of which perfectly capture the 80s vibes and teenage setting of Sailor Moon. The song was even used by Russian figure skater Evgenia Medvedeva during one of her performances!

Released in 2006, Death Note is based on the manga series of the same name. With a long-running presence and a captivating cast of characters, fans fell in love with this darker-toned anime.

‘The WORLD’ by Nightmare

Used as the opening credits scene for the first nineteen episodes of Death Note, Nightmare’s song ‘The WORLD’ became an instant classic. A dark and broody song, with fast-paced guitars and smashing drums, resonated with the young and angsty audience that Death Note accrued. Interestingly, Nightmare’s song ‘Alumina’ off the same album as ‘The WORLD’ was used as the credits song for the show!

The world of Pokémon is absolutely massive. The name is one of the most recognizable brands in the world, and it is still growing. Even after 25 years filled with games, films, trading cards, and shows, there is one stand-out song that everyone knows. The original theme song from the (English dub of the) Pokémon anime is an absolute classic, that most people still know all the words to.

Whereas it technically isn’t an anime song as it is for the English version of Pokémon‘s anime, the song must be included for nostalgia and popularity purposes. The song itself is a pop-rock song with a fast pace and catchy lyrics. It incorporates the franchises’ tagline “gotta catch ’em all” within its early 90s sound. The song defined a generation, and is one of the most recognized sounds among younger people along with the Star Wars and Simpsons theme songs!

Cowboy Bebop has a bit of a different choice for the theme song – for an animated show about a bunch of bounty hunters on their journey across the stars, the jazz-influenced instrumental track truly sums up the action-packed nature of the show.

‘Tank!’ by The Seatbelts

A largely jazzy song, The Seatbelt’s iconic track mixes elements of blues, swing, and pop together to create this contemporary and individual mix. ‘Tank!’ is used for all episodes of the anime, and has become an entry into jazz and fusion genres for fans since the release of the show. The song has since been remixed by musicians across the board, including EDM artists!

Regarded as one of the biggest anime shows to date, Attack On Titan has a theme song to match its’ giant style. The dramatic, dystopian and down-right delightful show has gained massive popularity thanks to its original plot – featuring a group of teens against horrifyingly big monsters, trying to survive and continue on against all odds.

‘Guren No Yumiya’ by Linked Horizon

Roughly translated as “crimson bow and arrow”, this track is the catchiest of all anime openings. Attack On Titan was the first anime that a lot of Western audiences watched, and the earworm of a chorus from this song has rooted itself into a generations’ minds. The song is hard, fast, and catchy! The song, interestingly, mixes both Japanese and German lyrics, due to the European setting of the anime.

Neon Genesis Evangelion, while a huge success in itself, is still a niche interest in the Western world. Featuring a young cast of characters living after a worldwide cataclysm – set in a future version of Tokyo, Neon Genesis Evangelion has a big plot, and a big theme song to go along with it.

Now, this is what we call a conflict of interests. This theme song is, like ‘Tank!’, quite a jazzy disco beat. But, the lyrics combine elements of the show such as depression, the apocalypse, and other such dark areas. The fact that Yoko Takahashi managed to juxtapose these two things is incredible. A fascinating fact: this song is one of the most popular choices for karaoke in Japan!

While anime mostly refers to TV shows, there are many other huge areas under the umbrella title. These can be films or games! Below are some of our favorites that are not from TV shows, but that has had a profound effect on audiences across the world.

Studio Ghibli is famed for its’ wholesome and fantastical films, featuring lovely animation and delightful soundtracks. It is hard to pick favorites, but the two stand-out film soundtracks from the studio – in terms of popularity and recognition – are Spiritclassicaled Away and Howl’s Moving Castle.

The 2003 Studi Ghibli movie Spirited Away immediately captured the hearts of watchers across the world – due in part to its catchy and emotional soundtrack. Composed by Joe Hisaishi, the original album scores highly on any review. It features the New Japan Philharmonic Orchestra, and on top of the classical music, has traditional Japanese instruments and some synths dropped into it! The melodies in songs like ‘One Summer Day’ have become very recognizable since the release of the film.

Another soundtrack by the master composer Joe Hisaishi is for the film Howl’s Moving Castle. The album features many different sounds – from the first few opening seconds of ‘Merry-Go-Round Of Life’ played on an organ, to the raucous orchestral music of ‘Sophie’s Castle’. The whole soundtrack is genius and makes for good listening. It perfectly accompanies the magical and loving story of Howl’s Moving Castle.

Persona 5 is one of the biggest anime games to date – made by Atlus studio, the game garnered astonishing popularity. The immense appreciation for this game does, in fact, partly rely on the funky soundtrack that accompanies the Phantom Thieves on their journey through the game.

The soundtrack features work from Lyn Inaizumi, the famed Japanese jazz and soul vocalist, as well as Atlus’ own sound team. The original songs are a blend of jazz, rock, and lounge music – with a bit of funk mixed in for fun. But then ‘Blooming Villain’ comes on, and it all goes heavy rock for a few minutes. The soundtrack has a whole spectrum of emotions; from laid-back beats over the rainy-day sounds to fast-paced, pulse-raising battle songs.

The songs in Persona 5 are all so good that there is a handful that is classed as the “theme”. The recommended tracks (covering different genres) are: ‘Beneath The Mask’, ‘Blooming Villain’ and ‘Life Will Change’ – all available on Spotify.

JoJo’s Bizarre Adventure, as the name suggests, is a wild ride from start to finish. Each series has a new theme song, and new characters, and new weird and wonderful plots. The theme songs are all fast-paced, energetic, retro rock-influenced songs. Some feature jazz elements, others metal. No matter which series it is, the theme songs perfectly set up the episodes and capture the characters’ personalities. 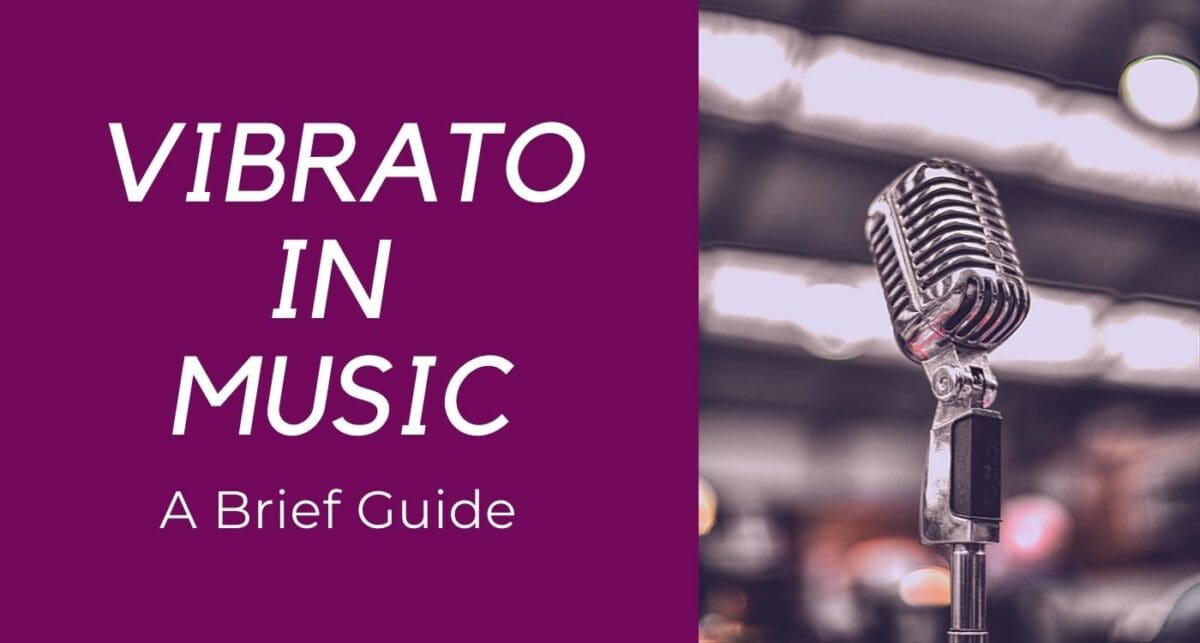 Vibrato In Music Guide: What Is Vibrato In Singing?

Music professional or not, the term ‘vibrato’ will be a recognized one. Vibrato is a singing technique that can make any singer sound world-class! Turn on... 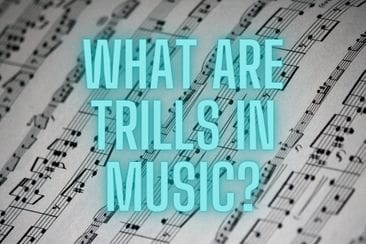 Music Trills: What Is A Trill In Music And Why Do They Matter?

If you listen to music from the Baroque period or even music from during the Classical era, you might see the form of musical ornamentation where performers...