Not yet a member? See what Sophie has worked so hard to build with Music Gateway by signing up to a free trial here. Read more about Sophie and her journey below! 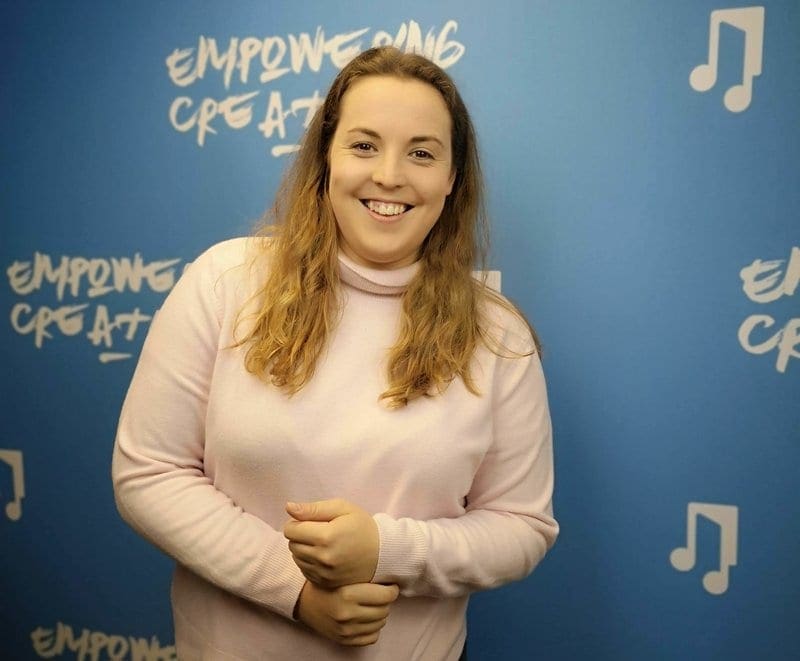 For the twenty-five-year-old Sophie, this is a giant step. Having joined the company as an intern in 2014, her potential was quickly recognised and she was promoted through the ranks to Marketing Manager in 2015 and Head of Operations in 2016.

At just 23 Sophie led her first major nation-wide campaign from inception to fulfilment, managing Music Gateway’s lead team, in partnership with Gibson Brands and Argos & Metropolis to encourage the next generation to create music. The prize package for the two winners, as well as thousands of pounds’ worth of equipment was shipped to 20 schools and academies across the country.  The competition also had an extensive and impressive judging panel, including music industry professionals from 20th Century Fox, Sony ATV, Warner Chappell and the legendary musician, Dave Stewart.

Sophie, from the Wirral, is certainly bucking the trend of Millennials who, according to a survey published in The Independent, are prone to “job-hopping within the two-year mark”!

The recent Deloitte survey polled 10,455 millennials – born between 1983 and December 1994 from 36 countries – and found that 43 per cent of millennials plan to leave their current jobs within two years and only 28 per cent have plans to stay beyond five years.

One of the reasons for Millennial job-hopping was given as this generation’s desire to work for companies who value more than just success in business and financial returns.

“When you’re working in a company like this, it’s hard not to stick around. We’re trying to create something that’s unique and very powerful for the music industry and we know there is just so much more we can do for music creatives.”

Small is also one of a growing number of young women working in technology, which, although being one of the fastest growing industries, still has had a significantly lower percentage of females than most other UK work sectors, at just 17% of Technology workers in the UK.  The music industry is also similar, in terms of high-level female executives, but there are many women to aspire to, such as Amber Davies, Rebecca Allen and Stacey Tang to name a few.

Sophie is a force to be reckoned with.

“Don’t be fooled by her easy-going, fun and enthusiastic appearance,” says Jon Skinner, CEO of Music Gateway. “Sophie is astute, proactive and has a great understanding of business development and a firm grip on the potential for our company.”

Small cut her teeth in music as an intern and Artist liaison at Festival Republic, the country’s largest festival production company, originally founded as an offshoot of the Mean Fiddler Group.  She worked her way through university at a law practice and as a talented rugby and tennis player, she’s also strategic, motivational, competitive and a great team player!

“Sophie is young, dynamic and has unquestionably deserved her progression through the ranks since she started with us four years ago,” said Skinner. “At 25, she may appear young for this position, but she has experience, attitude, drive and vision way beyond her years and we are truly lucky to have her.”

In Q4 2018, Small took over the responsibility of targets and KPIs across the company, to be in line with this year’s business plan. Her new role will see her manage all results across each department, taking an active international responsibility with planned business trips to India, China, Los Angeles, New York and across Europe.

“Music Gateway is about empowering creatives and it’s really rewarding,” says Small. “I think the platform we’ve created is truly unique from both a technical aspect and also for its huge potential – where we can go in terms of products for our members is just mind-blowing and I don’t see us slowing down any time soon. We have a huge ‘to-do’ list, which is really exciting”, she said.

Music Gateway’s continued mission is to develop solutions that empower creatives at all levels on a global playing field. With the recent announcement of a new client BMG Music Production and many more projects in the pipeline, the team is looking forward to 2019 being a benchmark year for the company’s ongoing success.

Want to be a part of this benchmark year? Sign up for a free trial today, no strings attached! Get access to a global community with playlist tools, exclusive opportunities, get your music in film, TV and more!