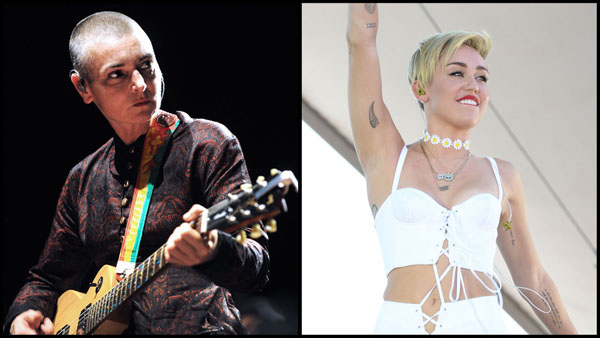 Back in the news… again. This twerking pop star is not just making headlines with her music and public performances but is now even taking on celebrities. Why you cry! Well I guess Miley doesn’t take lightly to any negative comments thrown at her. What particularly surprised me however was how the celebrity she entered the ring with being one of her idols that she claims have taken inspiration from with her music video to ‘Wrecking Ball’ and you’d expect her to acknowledge the advice given by that individual even if she had no intention to take any of it wouldn’t you?

To bring you up to speed it was brought to the attention of Sinead O’Connor last week that Miley had noted herself as an inspiration to Miley’s recent single’s video and guessing by the statement made by Sinead she didn’t agree too kindly with being associated with being behind Miley’s ideas.

An open letter was written for Miley Cyrus expressing Sinead’s concerns for the young pop star.

Here is an extract:

“I am extremely concerned for you that those around you have led you to believe, or encouraged you in your own belief, that it is in any way ‘cool’ to be naked and licking sledgehammers in your videos. It is in fact the case that you will obscure your talent by allowing yourself to be pimped, whether its the music business or yourself doing the pimping.? Nothing but harm will come in the long run, from allowing yourself to be exploited, and it is absolutely NOT in ANY way an empowerment of yourself or any other young women, for you to send across the message that you are to be valued (even by you) more for your sexual appeal than your obvious talent.?

I am happy to hear I am somewhat of a role model for you and I hope that because of that you will pay close attention to what I am telling you.? The music business doesn’t give a s**t about you, or any of us. They will prostitute you for all you are worth, and cleverly make you think its what YOU wanted.. and when you end up in rehab as a result of being prostituted, ‘they’ will be sunning themselves on their yachts in Antigua, which they bought by selling your body and you will find yourself very alone.?”

Sinead expresses further into the letter that she thinks Miley has real talent and her songs alone are enough for her to reach commercial success and that Miley doesn’t need to prostitute herself to be noticed.

“The message you keep sending is that its somehow cool to be prostituted.. its so not cool Miley.. its dangerous. Women are to be valued for so much more than their sexuality. we aren’t merely objects of desire. I would be encouraging you to send healthier messages to your peers.. that they and you are worth more than what is currently going on in your career. Kindly fire any motherf**ker who hasn’t expressed alarm, because they don’t care about you.”

Well what I understand from the letter is that it was a bit of ‘tough love’. Sinead was expressing her opinions but in a way to try and help the young pop star through her own experiences and personal knowledge of the music industry; a kind of mum of the pop world?

Miley didn’t see the letter in that way clearly.

In a poor move Miley took the time to go back all the way through Sinead’s twitter posts in 2011 (where did she find the time for that?) and made fun of Sinead’s tweets regarding her brush with mental health issues.

The caption being: ‘Before Amanda Bynes… There was…’ and the tweets displayed being:

“and I desperately need to get back on meds today, am in serious danger. Please email me at iamwonderful@me.com if u know or are..”

These tweets really are now irrelevant and have been seen before, so Miley bringing these back up to the public eye really didn’t do a lot than make a few retweets and favourites and put her in a very bad light indeed. To which Sinead replied to in her next letter.

“Furthermore you posted a photo of me tearing the pope’s photo .. as if to imply insanity.. by doing so all you have achieved is to expose your staggering ignorance. I suggest you read The Philadelphia Report, The Boston Report, all the reports which will illuminate for you why that action of mine remains sane and valid. By mocking it you mock every child who suffered sexual abuse at the hands of priests and had it covered by the Vatican. You could really do with educating yourself, that is if you’re not too busy getting your tits out to read.”

“Ms Cyrus has today posted tweets of mine which are two years old and which were sent when I was ill and seeking medical help. She has done this in an attempt to deliberately cause me harm and hurt. I wish to confirm that I am quite well and kindly request people cease e mailing me in the mistaken belief these are recent tweets. Ms Cyrus’ lawyers will be contacted by mine regarding this matter.”

Bad move Cyrus. Yes she is making herself known but now not for the right reasons. To mock somebody about health issues is deeply wrong and does she really think that her fans will want to be associated with an individual that openly does this without thinking?

The last two tweets by Miley in response to the last post from Sinead were the following:

“Sinead. I don’t have time to write you an open letter cause I’m hosting & performing on SNL this week.”

“So if you’d like to meet up and talk lemme know in your next letter.”

I do believe this is a very childish move by Miley and is essentially digging a deeper hole for herself which will be very difficult to come out of. So as I said in my last post about Miley I expressed that there is no such thing as bad press – just press. I do stand by this but only in certain circumstances. If the press is around an artist’s music and personal public performances and actions which ONLY involve them as an artist then I believe it is simply press and open to interpretation. When it comes to this however I do believe that these childish actions aimed to publically humiliate an individual, especially through the mockery of mental health issues, is not the way forward and in this instance; yes this is bad press.

I do wonder however, is this just another marketing stunt?

It could be but this time at the price of causing another individual un-needed trouble and humiliation. People will likely stand by Sinead O’Connor throughout this and as much as I previously showed my liking towards Miley and yes I still personally like her music and marketing stunts… this I really don’t agree with.

Let me know your thoughts in the comments. Has she gone too far this time? Share and tweet around to add to the discussion.