Madge is back, but not as you expected…

So, Madonna’s back, but not as you’d expect, with a #secretproject that she has been feeding us random trailers for the last 3 months, it’s called ‘Art For Freedom’ and it’s opened with a video that explains and baffles at the same time. 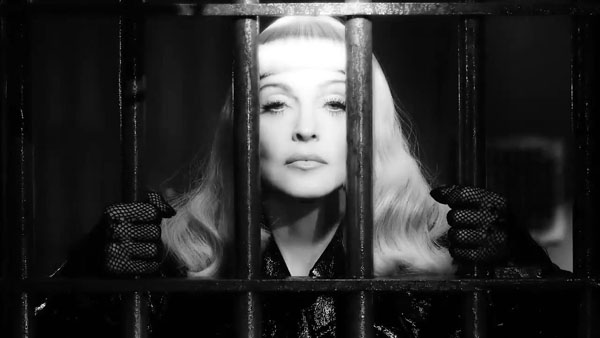 You can see it here, it’s 17 minutes of dark, moody shots with some quotes from Madge herself that explains she wants to start a revolution. She doesn’t really explain what, where, how, when and who, or any of the questions that you’d expect to be answered in a 17 minute video though…

What it actually does is show you that she’s really trying to out gun Lady Gaga in the randomness stakes, and actually succeeding, which is no mean feat!

Basically (and I had to do some actual research on this because you know, video = slightly unusual) this is Madonna’s stab at starting a global initiative to further freedom of expression, which she decided to do whilst touring the world and experiencing fascist approaches towards freedom of speech.

Now this is a very noble cause, definitely, free speech should be upheld in every corner of the world, but unfortunately it’s not, Pussy Riot in Russia a prime example, everyone knows that free speech is a basic human right, and Madonna clearly feels strongly about these issues, she’s actually spoken out against Pussy Riot’s plight in Russia and has risked being banned from the country altogether for it, you go girl!

So clearly, she has the power to be an influence around the world on these issues, generally, a celebrity would have gone to the places where she experienced these injustices etc. and this would have maybe made her revolution slightly more standard but when has Madge ever done anything by halves? Consider the extremely controversial black Jesus in the Like a Prayer video! Once she’s got an idea in her head, it seems like nothing’s going to stop her, and when you consider the success that she’s had over the past 3 decades, you can’t really blame her can you?

When visiting the actual website, and getting into the nitty gritty of what this project is about, it’s actually a very interesting project, people submit their own ideas of freedom through video, music, poetry or photography, which will then be sifted through by the people at Vice magazine/Madonna/Stephen Klein (Video Producer) and put into a calendar on the website to show people’s ideas of freedom. The website also has daily features of what people have sent & regular contributors to the freedom fight that haven’t made it onto the calendar etc.

So yeah, check it out (www.artforfreedom.com) it’s actually a very interesting, noble, and somewhat ground breaking thing to do, once you get past the video, I’m sure it’ll be worth it, I know I’ll be following it, because I’m a sucker for freedom! 🙂

What do you think of this new Madonna move? Join the discussion and let us know in the comments and as always… share and tweet!!