Why Did Taylor Swift Take Her Music Off Spotify?

Last night, as I’m sure most people have heard, Taylor Swift was the latest artist to grab headlines after removing her entire catalogue off Spotify whilst simultaneously refusing to release her new Album, ‘1989’ on the streaming platform. Speculation suggests that she is frustrated, as are many in the music industry, with the low royalty rates that artists get paid by streaming services, and this action may have been taken in the hope that more people would flock to purchase her album. Taking a pessimistic view, it could be said that Swift (or rather her record label, Big Machine) are just doing this for the money. On the other hand, it could also be perceived that she is standing up for artists everywhere by demonstrating to them that there is another way to reach out to fans. 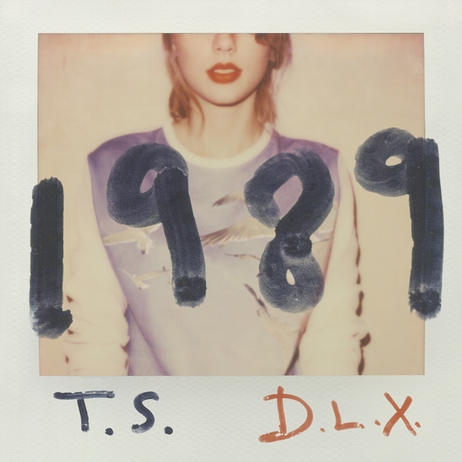 Much like Thom Yorke showed everyone in the last couple of months, there are other ways to get your music out to people. Others, like Beyoncé and U2 have used similar tactics to market their new albums, i.e. by doing something unexpected. It should be noted though that the only reason they were able to get away with this (on the most part) is because they already have huge back catalogues and a fair bit of money. It’s all very well and good for Thom Yorke to tell us that if he can have a successful album release on Bit Torrent, then so can anybody else. Does he honestly think though, that the 16 year olds who play down the pub every other Sunday are going to have their next album downloaded nearly 4 million times? To be fair to Mr Yorke, it has worked in his favour, and he’s probably earned himself a fair bit of cash recently for this method of album delivery. However, it still doesn’t mean that anybody can do it.

Taylor Swift is a very similar case. By doing something a little different, she has grabbed headlines in a world where it seems to be increasingly harder to do so, to sell as many albums as she can. With record sales and downloads continuing to decline, it’s somewhat understandable that artists would do anything to increase their sales, even if just a little. However, as streaming becomes more popular, more people are likely to ignore the payment option, and either scour YouTube or torrent sites to hear the album for free. As of yesterday, there were plenty of “1989 full album” videos available on YouTube, one with over 400,000 views. Having said that, other streaming platforms such as Rhapsody, claim that Swift’s music is still available on their services. By taking music away from one of the most popular streaming services, Swift is creating a sense of exclusivity with her new album and indeed the rest of her music, by driving fan traffic elsewhere. This method may have worked in Swift’s favour, with some music industry insiders predicting that ‘1989’ could sell over 1.3 million copies, making it the fastest selling LP by a female artist ever. 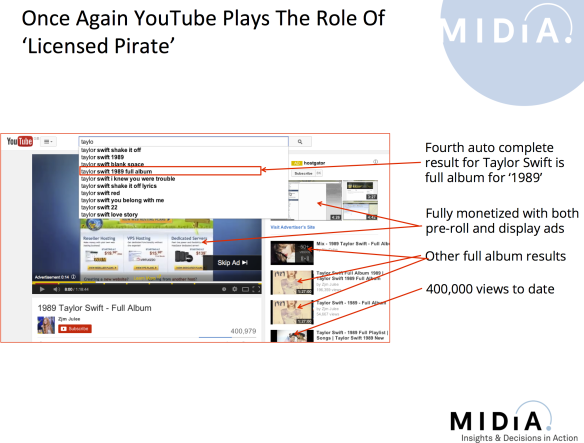 Another interesting point to note is that Taylor Swift is signed to Sony/ATV Publishing who threatened to remove their works from performing rights collecting societies BMI and ASCAP in the US, if reforms were not made to collective licensing rules. This implies that some of the largest labels and publishers are seeking to distance themselves from collection societies so that they can “go it alone.” Presumably, this is to gain more control over their currently licensed catalogues and also save on the small commission that they have to pay. Whether this is because they have plans to release and monitor the music on their catalogues in new ways, or whether they’re just making the threats in order to gain better terms for their writers, is yet to be seen.

Spotify’s response on their blog was quite humorous, but the whole story raises questions about the movement into the “new music economy,” as their post put it. Could we see more artists pulling their content from all streaming services to try and drive traffic to sites and/or services that will see them getting paid more? Or is this an isolated incident that others will not emulate? Although artists have seemingly been fighting streaming services and new technology for years now, it could be perceived that things are changing. As musicians continue to get closer with their fans and gain a better understanding of what they want, it appears to be more about serving the fan and giving them a great experience, rather than the other way round.