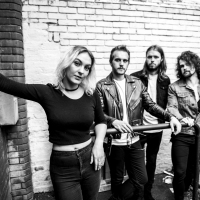 
From the outskirts of London, Running With Wolves are the rock ’n roll 5-piece you need to hear. Part arena-rock throwback, part groundbreaking groove machine, RWW’s blues-infused electricity sounds like the eclectic mashup of The Pretty Reckless, Aerosmith and Royal Blood. Collectively, the band have a startlingly eclectic set of influences; from Holly’s pop and R ’n B background lending her an instinctive ear for strong, melodic hooks, to Dylan’s vision for arena-filling choruses and gritty-yet-soulful soloing, the blend boils to a stingingly smooth rock band with satisfying bite.

Meeting as music students, Running With Wolves began as Lazarus. Quickly, arrangements were made for a short, five song set off the back of originals written by Dylan, and the band began to hone its skills on the live scene, playing in any sweaty room they and a clustered, captive audience could fit into. A small following quickly rose and the band recorded its first single, ‘Take Me With You’, in the November of 2014 with Chris Coulter (Arcane Roots, In Dynamics). The new, professional quality product, paired with a live recording from Camden’s The Fiddler’s Elbow, let the band know they had something worth pursuing. They would go on to further refine their sound, searching for just the right way to bind their unique sonic toneprints together. Never satisfied with mediocrity or disingenuity, the band wanted the music to speak for itself and, importantly, to speak for them.

Since launching as Running With Wolves, the band have released their first single, ‘Take Me With You’, along with the B-side, ‘Hey You’, as an independent artist, in early February 2016. In the summer of the previous year the band played for a crowd of over 2000 at Frimley Lodge Live festival in Surrey, England. They have since recorded three new songs in heavy, gritty stereo with producer/mixer Phil Humphreys (Buffalo Summer), ready for a 2017 release schedule.