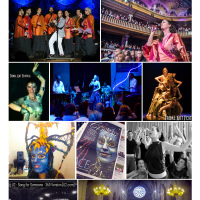 Cumie (“kyu-mee”) is an American singer, music producer, percussionist, dancer & certified yoga instructor, with home bases in Barcelona/Mallorca and London. She travels the United States and Europe giving concerts, performing either solo or with her band. Cumie has a cameo singing appearance in U2's new 3D music video, "Song for Someone", and she is the featured voice on the new Cirque du Soleil CD, "TORUK".

Singing in choirs and theatre since childhood, Cumie has since studied or performed with various masters in the field of music, including Bobby McFerrin, Carlos Núñez, Baird Hersey, Dave Stringer, MuOM Overtone Singing Choir and other internationally recognised artists.

Cumie’s home genre is soulful World-Music. She records in many styles, ranging from pop and R&B, to New Age meditation and mantra, to Tribal Fusion belly dance and cutting-edge dance club tracks.