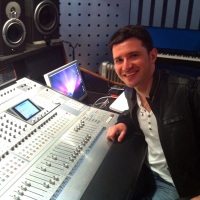 Andy Ross (32) is a multi-instrumental writer/producer born in Luton, now based near Manchester, who started writing songs at 11, had his first airplay at 13 and became the youngest ever PRS writer member in 1997 at 14. Andy opened Astar Studios in 2008 and two years later produced one of the 12 Official Mercury Prize ‘Albums of 2010’ - ‘Golden’ by The Kit Downes Trio.

In 2013 and 2014 Astar Studios achieved joint runner up in the ‘Studio of the Year’ and ‘Best Studio’ categories at the prestigious Pro Sound Awards, held at London’s Ministry of Sound. Astar Studios introduced a scheme in 2009 to help unsigned artists with interest free recording loans, acknowledged for ‘Best Initiative By A Recording Studio’ award category at the Audio Pro Awards that year.

As a writer and producer, Andy is both prolific and versatile and can easily adapt to the discipline of any genre. Despite his roots being in rock and pop, he has produced recordings for Classic FM, is now renowned in jazz - receiving 4 star reviews in the Guardian and Observer and has produced the highly acclaimed ‘Yamaha New Jazz Sessions’ CD series, spanning seven albums since 2008 and selling over 100,000 copies, the latest being released at the end of 2014 with the Xmas edition of Jazzwise Magazine. In 2014 Andy co-produced a cover of The Style Council classic ‘The Paris Match’, with Steve White by Kristyna Myles to celebrate the band’s 30th Anniversary. Paul Weller described the track as “Absolutely Stunning”. He is currently producing Kristyna’s second album, ‘Paint A Brighter Day’ for release in Spring 2015.

An international writer for music publisher Clippers, Spain, whose catalogue ranges from Elvis to Christina Aguilera and Coldplay, among Andy’s successes are three tracks on the debut album of Spanish ‘Popstars’ finalist and TV presenter Guillermo Martin’s band ‘GPunto’, released by Universal, Spain. Back home in the UK Andy writes and co-writes for many independent artist projects. Commissions have included writing for a new concept arena rock show, for which he produced tracks with legendary rock singer Doogie White (Ritchie Blackmore's Rainbow) and Rick Wakeman vocalist Chrissie Hammond.

Featured on the cover of ‘Songwriter’ magazine and Interviewed for top producer site RecordProduction.com, Andy began playing guitar at age 10 and at 13 formed the teen pop/rock band AL!VE as frontman/songwriter. It wasn’t long before music took over Andy’s life as he balanced schoolwork with a hectic schedule of writing, rehearsing, recording and performing. Intense regional press led to a visit from a BBC documentary film crew and live appearance on the National Lottery with Madonna in front of 12.5 million viewers. In November 1998 the band became the subject of worldwide media frenzy after receiving an invite from Her Majesty the Queen to perform a 40 minute live original set penned by Andy at HRH Prince Charles 50th birthday reception. This sparked a host of major live, radio and TV appearances including ‘Live and Kicking’, ‘This Morning’ and ‘The National Lottery’. In a decade together AL!VE released an album, ‘All Frequencies Covered’ (2002) and latterly a single ‘Heaven City’ (2005) that coincided with tour support for legendary former Stone Roses frontman Ian Brown. Endorsed by Yamaha Music (UK) the band toured extensively. Along the way Andy left school at 16 to study music at Access to Music, Manchester, where he achieved a distinction and went on to graduate from the University of Manchester with a 2:1 BA (Hons) degree.

After leaving university Andy decided to concentrate on his music full-time, in particular his songwriting with a view to securing a publishing deal. He had already written many songs outside of the band that was beginning to lose momentum and saw his future as a writer and producer. Having studied and amassed considerable recording experience, working with a number of producers and in a variety of studios, he began a strict daily regime of writing and recording.

In 2008 Andy opened Astar Studios in Heywood, Lancashire where he has taken an innovative approach and draws upon some of the UK’s finest musicians to forge a self-contained in-house songwriting and production team that is now paying off.