We've partnered with Motor Records in Berlin and with it comes a fantastic opportunity for our members to be directly introduced to their R-A-R team. This is a huge and unique opportunity, so if you fit the bill, pitch to the project and let's go! This is for anyone looking to break into the German territory and marketplace, they're not signing specifically to the label but helping with the presence of artists & bands in this area. Before reading ahead and pitching, either as an independent artist/band or a representative of such, Motor Records require that as an artist/band you do have your own traction prior to coming to them and money to invest into the project. Motor Entertainment GmbH was founded by Tim Renner in 1994 under the umbrella of music conglomerate, PolyGram (later known as Universal Music). Motor quickly established itself as an influential, alternative label and discovered and broke internationally groundbreaking artists such as Rammstein, Muse, Nelly Furtado, The Rasmus, Sportfreunde Stiller, Tocotronic and many more. In 2004, at the height of their success as the decisive driving force behind the European music scene, the team adopted a new approach and reformed as Motor Music, this time as an independent and self-sustained record label. The contacts and know-how of over 20 years of industry experience proved to be flexible commodities that could be invested without a problem in this new venture. Since 2009, Motor offers artists its experience and infrastructure as a label service as well as management, publishing, editorial services. The service offered provides; - Over seeing the entire release. We take care of product management, co-ordinate promotion and marketing activities, manufacturing, distribution & accounting. - Organise the worldwide or GSA distribution at top conditions. - Use their contacts in the film and advertising industry to acquire sync deals for you. - Receive 20% of the net turnover, minimum € 5000. - Pay out all other income (physichalsales, downloads, streaming, videos, sync fees) via a central contact partner. - Do not participate in currently conventional additional income such as live income, merchandise or sponsorship deals. - You retain all your rights. - They support you with financing via distribution/publishing advances or crowdfunding.

There are currently 414 projects live on the platform

You can submit your music for free with the aim of showcasing your talent to our huge network of music industry professionals worldwide. Our organic Spotify playlists cover multiple genres. Reach record labels, artist management, music supervisors, music publishers and radio stations. 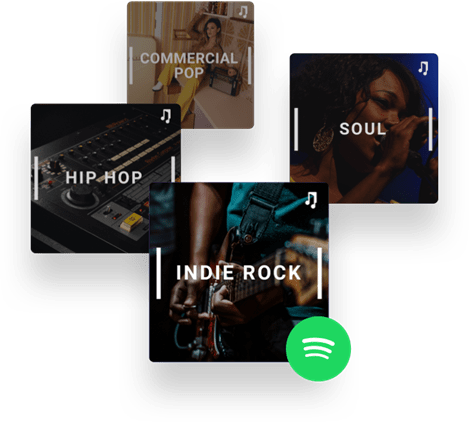 This project is only open to Music Gateway members. Sign up for an account to submit your music now!