We recently had the pleasure of chatting with songwriter/producer Jack Kelly. In collaboration with friend Fionalees, the pair created charity single ‘Rise Again’ during lockdown. The song was a tribute to Fiona’s brother, who tragically passed away from Covid 19.

We sat down with Jack to talk about the success of the project, his role in the music industry, and what he has planned for the future.

First of all, tell us a bit about yourself and how you got into music. What’s your role in the industry?

My name is Jack Kelly. I’m 27, a producer, songwriter, and session drummer. I’ve been part of the music industry for over 15 years. I have worked with artists, Jocelyn Brown, Da Beatfreakz, and Hannah Symons, to name a few. I’ve performed at venues such as Ronnie Scott’s Jazz Club, London City Hall, and Cafe De Paris, etc.

I also managed a youth community and professional music studio for seven years in South London. We provided free music education to young people within the local communities.

I grew up listening to Michael Jackson, Stevie Wonder and AC/DC but never thought I’d study music. Until 2004 when I watched ‘School of Rock’ for the first time, that’s when my musical journey began.

You’ve worked on lots of really exciting projects, which would you say was your favourite and why?

This song ‘Rise Again’ has to be my favourite project I have worked on because the story is so special. To be creating such a powerful, uplifting, and important track in these times with my friend is priceless.

You wrote ‘Rise Again’ with Fionalees in a few hours. Was it different from your normal songwriting process because of quarantine?

It was so unlike anything I had been involved in before. Fiona called me while I was sitting behind the piano and we just talked. We had no intention of writing a song at first, in all honesty.

I said, “Maybe one day, when you’re feeling up to it, we can write a song in memory of your brother,  maybe something uplifting”.

Her reply genuinely shocked me. When I think back to the phone call we had that evening, I have no clue where she found the courage and strength to say, “Let’s do it now!”.

I played some chords and within seconds Fiona started to sing. 3 minutes later, she came up with a whole chorus.

We both knew this could be something and within 30 minutes, Fiona finished writing the first verse and chorus, and I was already working on the bridge section. She made it sound so effortless. Still, this was on the day of her brother’s passing.

A few days later, Fiona had written the rest of the song lyrics while I had already begun arranging string parts.

Fionalees asked her friend and Pianist, Robert Simonis if he could bring his expertise to the chord progressions I had written, and well, he certainly did that and more!

I contacted friend’s, Aaron Rozario and Nicolas Haag, who both kindly played electric and acoustic guitar on the record.

We hired the services of a Nashville, Tennessee co-producer Austin, to help mix and master the  track. Fiona, Aaron, Nic, Kaoutar (my fiancée), and I all tracked choir vocals separately. Which eventually were made to sound like we were all in one big room together and not in lockdown.

After 3 months of hard work through phone calls, video calls, group chats, and working until the early hours. ‘Rise Again’ was finished.

In what ways would you say Covid has affected your work in the music industry?

The pandemic had and still has affected the music industry massively. A lot of music studios and venues had to close down, which has left a lot of musicians out of work.

Thankfully I have invested in professional equipment that allows me to work on music from home, otherwise, I wouldn’t have been able to work on ‘Rise Again’.

It’s amazing that you’ve chosen to donate proceeds to charity. What made you decide to do this and is there a reason you picked those specific ones?

We decided to donate all proceeds to charity because the song stood for so much more than anything we had worked on before.

I chose Cruse Bereavement Care because they have helped so many people to overcome their adversities. The song ‘Rise Again’ was born out of adversity, hence why this charity is so close to my heart.

You managed a youth community music studio for 7 years. What made you want to work with the community studio and what did you achieve?

I fell into the youth community sector after volunteering to help teach a group of young people, 9 years ago. That’s when I noticed that not all kids have the right facilities, or even support from their families when it comes to wanting to do music.

So we created a safe, welcoming, musical, and educational environment where they could come together and work on collective or individual projects.

Seeing how the young people progressed, made me want to give more to the local communities. After 6 months of volunteering, I was offered a position, while still studying music at university.

This eventually led to managing the music studio. That’s when I was looking to hire a dedicated vocal coach to help and support the young musicians with pitch, harmony and performance techniques. That’s how I met Fiona and the rest is history.

What do you think of Music Gateway?

I gained some great contacts which resulted in recording and live performance opportunities when becoming a member all those years ago.

I’d say my favourite part of Music Gateway is both the opportunity to connect with like-minded musicians by applying for projects or creating one, as well as the chance to pitch songs for Sync.

Yes, I am currently working on new material with various artists in the U.K. and the U.S. I am also working on a personal project for 2021.

I recently recorded a live performance of Fionalees at Sarm Studios, which will be released next month. A Behind-The-Scenes Short Documentary will be out, thereafter.

Myself and Fionalees would like to sincerely thank the entire team at Music Gateway. Especially Becca, Mary, Rachael, Heather, and Ella for their support, advice, encouragement over the last few months. And also, for raising awareness about ‘Rise Again’ and its cause.

We’d also like to thank anyone in advance for purchasing the Charity Single via iTunes, Amazon or donating via the GoFundMe Page.

It means a lot to know that people are getting behind the message of the song. As well as a charity that provides such amazing support.

Check out Jack’s socials below!

We really hope you enjoyed reading all about Jack Kelly and all the amazing work he’s done and plans to do in the future! Music Gateway is also here to help you. Find people to collaborate and work within our global community, promote your music, get your music featured in film, tv, games, adverts and more! The best part is that you can try Music Gateway for free, no strings attached, just sign up below. 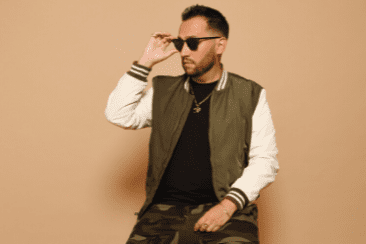 Here at Music Gateway, we’ve been working with the wonderfully talented Boom Dice, a Grammy-nominated Producer, Songwriter, Mixer & Artist, for a...