The Vinyl revival, Fine Art Audio and One Stop Records in Richmond, 1967 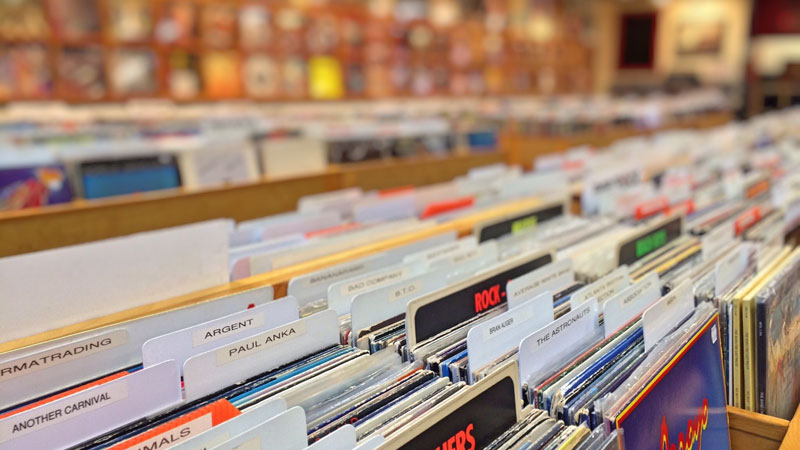 The vinyl revival in recent years has come as a surprise to many, but not to me. To me it became obvious that, as time went by something emotional was being lost from the experience of consuming music.

Back in those days it was all Vinyl. It was a golden time with what are now viewed as classic albums coming out weekly. Here are two very interesting aspects of customer behaviour from that time which can inform us as to why there has been a vinyl revival. First of all there was the shop window. From time to time the shop window would be redone by a designer who would arrive and create a new window. This involved albums being inserted into plastic sleeves that were part of what looked like a train line whereby the albums were suspended within this train line and stretched diagonally and horizontally across the space behind windows. To watch this process was to realise immediately how seriously the visual presentation of these albums was taken. 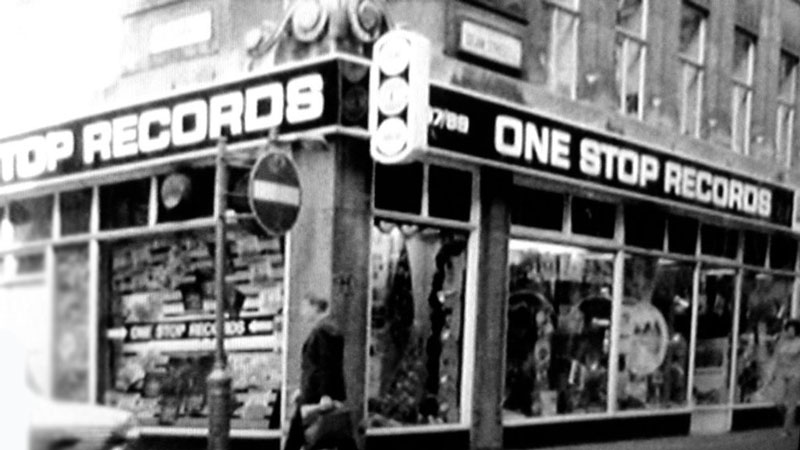 It was a ritual for the customer to look into the window and see what was new, but more to the point, what was being presented to them in the window by the shop itself. Then there would be posters on the wall in the shop. Poster design and especially the design of record sleeves was a way of presenting the music visually to the public. When somebody bought one of these records, they physically owned the product, but of course they also had the artwork. From the customer’s point of view they felt part of the One Stop Records community, we knew them and they knew us. The music they purchased was the soundtrack to their lives and they gave great emotional value to it.

Interestingly it was often the case that you would offer them a bag to put their album in, but on many occasions the bag was refused. This was because they wanted to walk out of the shop with the album on display, so that people would see what they had purchased. People wanted to communicate their musical tastes to others. It was a ritual of ownership.

When the CD arrived things changed dramatically. You now had a small plastic box and the impact of the cover art was diminished.

Many people began to complain the sound of the CD was inferior to the sound of Vinyl. However the industry moved on and made a fortune from the CD. Back catalogue arrived on a medium that was much more portable and convenient than the Vinyl LP record. Before the arrival of the CD we had the cassette, which meant that music could be taken with you and played in your car, and then we had the Walkman portable music device, so you could now carry your music with you, in your pocket. However once again people would say that the quality of this music, with regards to the fidelity of its reproduction, was inferior to Vinyl.

Digital recording was presented to the public as a superior audio. Time moved on and eventually a new medium arrived, the MP3, which once again – although it allowed music to be distributed to the public in another new format, many people thought something was being lost. In our times we now have Spotify and Apple Music, which if you subscribe to them, means that you can have virtually the whole back catalogue of the musical art form available to you.

However record producers are no longer credited and even some writers have also disappeared from credits. The album format also allegedly was diminishing in importance as people turned to creating playlists from individual tracks. We now have a revival of vinyl and the album format, along with the cover art, and the latest news is saying that producers and songwriters are to be credited once again.

The situation could not be clearer, the MP3 or CD is is not a Vinyl album. So whatever it is that attracts people so much to this original format, it seems to have found a new generation of people, that need a more significant and physical involvement in the consumption of a medium that they consider to be the best way to render, fine art audio.

Just as it was at One Stop Records back in 1967, it is again in Vinyl record shops all over the country. More and more shops seem to be opening selling Vinyl, this is the customer’s choice. What they are saying by their actions is, as well as being an entertainment, for many of them, this music is as important an art form as Photography, Film or any of the visual arts. Having lived through the whole cycle, I must say it brings a smile to my face, and hopefully to yours.

Richard Newman is a prolific musician, producer and author. You can find out more about Richard’s extensive career, as well as his book ‘Tubular Bells’ here.

He is also one of our Game Changer members if you would like to be a part of a network with thousands of members like Richard, click here for a free trial.