This is the introduction to a series of guides on how to record and produce tracks for those who are new to working with audio. Specifically, this series will walk you through recording and mixing a track on Logic Pro X, as it’s the most commonly used audio workstation. There will be weekly additions to this blog, each concentrating on a new part of the process. Don’t worry if there’s a word you don’t understand, I’ve included a glossary with an explanation at the end to explain what any uncommon word means.

In this issue, I’ll be covering microphones and recording, then how to compile all the takes of the audio that you record into a single audio file.

These microphones are known for being very detailed due to their high sensitivity and also quite flat in frequency response[1], meaning that it records all frequencies at roughly the same level.

Generally, because of this they are used for recording vocals and quieter instruments as they will be able to pick up the intricacies of those sounds, but also because its sensitivity means that it isn’t particularly durable and some can be quite fragile.

These microphones are almost completely opposite to condensers as they don’t provide as much detail and generally have a warmer, slightly dull sound as the frequency response has a tendency to be weaker at the top end. However they are far more durable and for this reason, are very often used for live performances as well as on very loud instruments such as drums.

Here are a few quick, general rules of recording that you can use to approach recording most instruments: 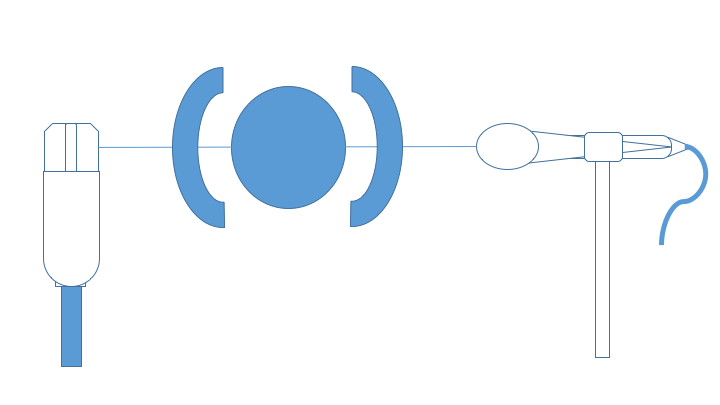 (This might be a bit tricky to understand but it’s really important to know!)

Essentially if a sound wave arrives at two microphones at different times, when those two recordings are played together they will creative ‘phasing problems’ which is where the audio sounds strange and like its being put through a filter. To avoid this most people stick to the ‘three to one’ rule which is where the two microphones are placed apart at least three times the distance that either microphone is from the source its recording. 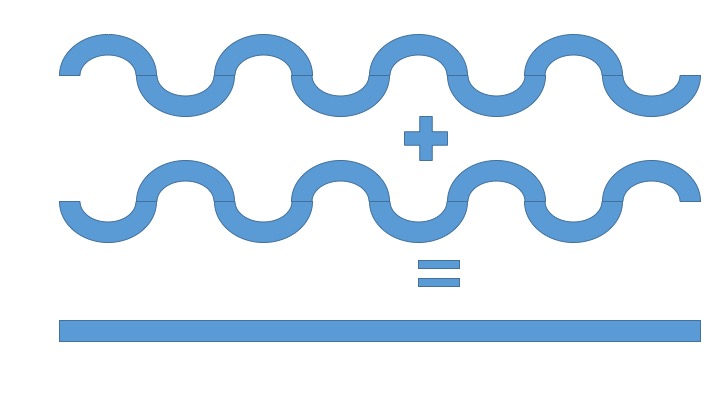 What happens when two totally out of phase sound waves are recorded together. 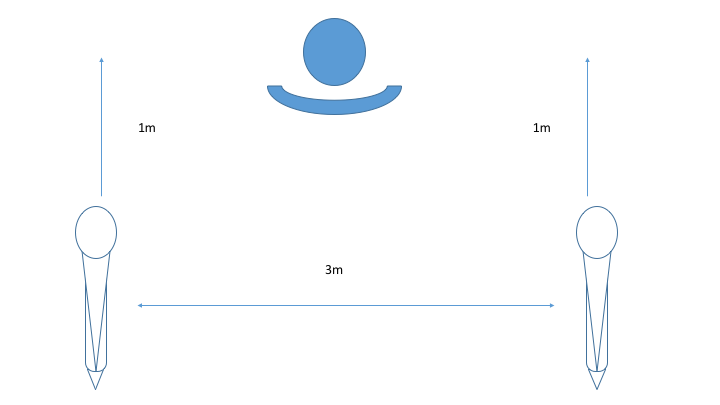 Once you have your microphone setup the next thing to consider is getting the audio into your workstation. Generally the modern recording pathway goes like this:

Often preamps will be built into audio interfaces but for best results a stand alone preamp is used, especially with quieter, more sensitive microphones.

It’s really important to be aware of and monitor what level you’re recording in terms of loudness. This process is known as gain staging. To understand this you need to be aware that once the sound reaches the microphone’s diaphragm it essentially becomes an electric signal. If this signal gets amplified too high for the system that it’s in, it will distort the signal as the hardware won’t be able to cope. This is known as ‘clipping’.

For this reason, you need to make sure that at no point in your signal pathway to your workstation, there is any hardware that is clipping. This is usually shown by a VU meter turning red. You can also hear the distortion if it is clipping too. Generally I would advise that you try to keep the power or volume of the signal as consistent as possible through your signal path. It’s recommended that you don’t record any louder than -6dB to avoid any clipping if the sound waves suddenly get louder, but also no quieter than -16dB.

Once you have all this sorted, you’ll be ready to record!

No matter how good you or your musicians may be, it’s always worth doing multiple takes. A great way to record multiple takes and then pick the best parts is called compiling or comping.

I’ll show you how to do this in Logic, where it’s known as a “Take Folder”.

So you’ll have your first piece of audio recorded and your window will most likely look a lot like this: 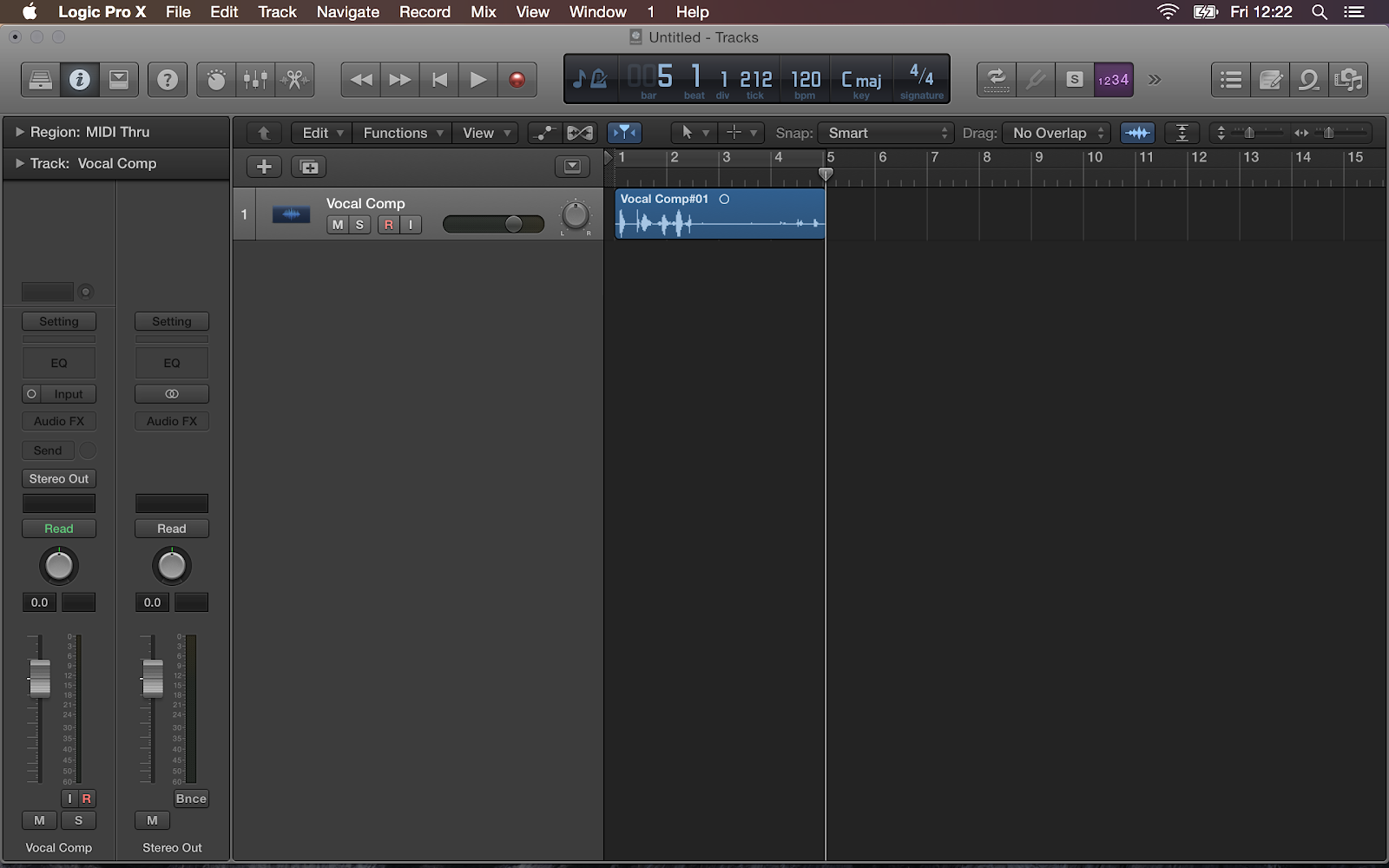 will want to clickto create a new takefolder as I have done: 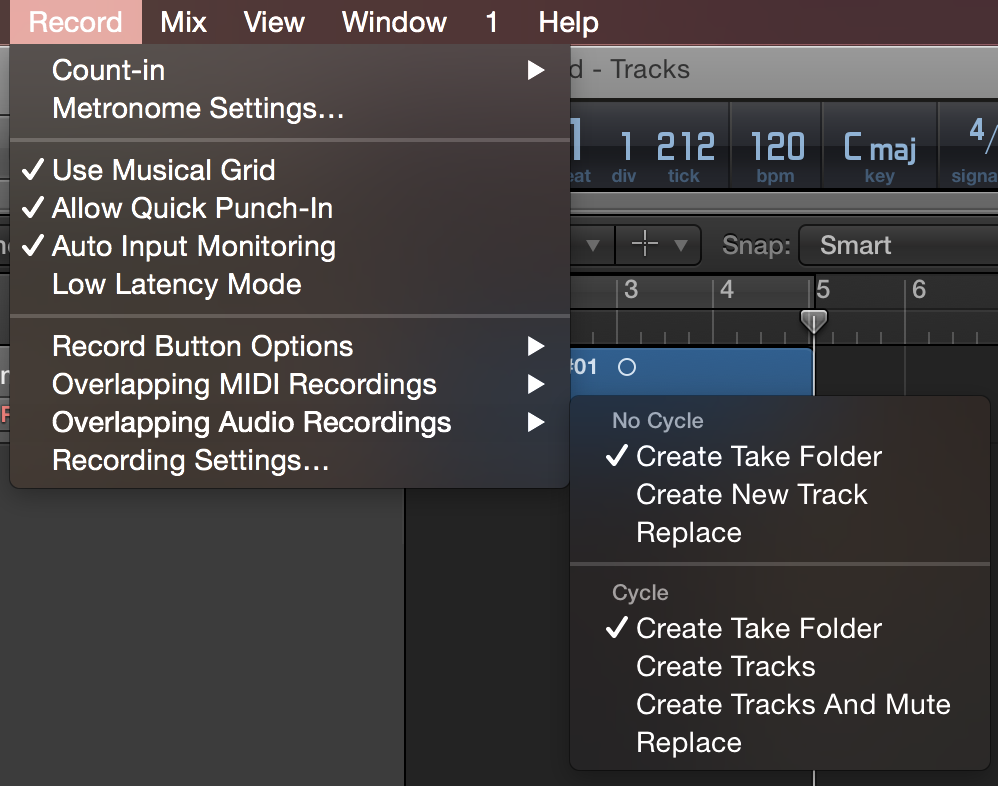 Once those settings are ticked, recording new audio over the existing audio will bring up this view:

Each new recording you now do will stack up on top of each other allowing you to do multiple takes while keeping all the audio within one track.

Once you have a suitable amount of takes and want to start piecing together the best bits to create your performance by simply just selecting the parts you want to include with your mouse like so:

You can also change the crossfades[6] between the takes by switching to the fade tool and dragging the crossfades made in the comp. You can then minimise the compilation view by clicking the arrow at the top left of the audio file, next to where it says “Vocal Comp: Comp A” on my example.

This covers the bases for recording and compiling takes of audio. Thank you very much for reading, I hope you were able to learn something and will be mastering the studio in no time!

The next addition will cover the basics of audio editing and automation, so there’s that to look forward to!

[1] Frequency response – The output or input level of each frequency, generally ranging from 20Hz to 20kHz.

[2] Diaphragm – A thin sheet of material that forms a partition.

[3] Reverberation – Reflections of sound waves within a space.

[4] Preamp – An amplifier that will boost the power of a signal passing through it.

[5] Interface – In this instance it is an analogue to digital interface where the analogue signal is converted to digital.

[6] Crossfades – A section of two connecting audio files which fade into one another.

How To Get Your Music In Films

In 2018 the film industry was worth $136 billion. It’s a huge, global industry that spans countless genres, niches, fanbases and markets. Filmmakers have...

Learning A New Instrument: Should I Teach Myself?

Learning A New Instrument – Should I Teach Myself?

How to Get More Followers on TikTok

Have you grown frustrated with creating brilliant content for TikTok but receiving very little recognition? If this sounds like you, all is not lost. Here...