This is the next in a series of guides on how to record and produce tracks for those who are new to working with audio. Specifically, this series will walk you through recording and mixing a track on Logic Pro X. , as its the most commonly used audio workstation. There will be weekly additions to this blog, each concentrating on a new part of the process.

In music, chorus is described as many similar sounds, or timbres of instruments being played together and being perceived as one sound. This is the same for the chorus effect, except it changes the sound of one audio file and makes it sound as though there are lots of similar sounding pieces of audio being played together. This is done by duplicating the original audio, then filtering each duplicate slightly differently and delaying it. This occurs naturally in string sections which is why unison strings or double tracked vocals sound so luscious..

Phasers are slightly more complex to understand. They also use filters, but in a phaser there’s two or more comb filters – filters which ‘comb’ out certain frequencies – which cycle up and down the frequency spectrum and create a swirling effect from the phasing differences created by the filters. Essentially a phaser will make audio sound as though it’s passing through a filter that has constantly changing parameters.

Overdrive is a way of distorting audio signals through clipping. This effect drives the signal past the capacity of the circuit which creates harmonics which would not otherwise of been present. These harmonics are what create the dirty, distorted sound. The more you boost the signal, the more of these harmonics are created and thus the more distorted the sound is.

Saturation is an analogue-exclusive way of distorting audio, all though it can be emulated digitally. Saturation occurs when recording onto tape and the audio signal is too powerful, which actually physically alters the tape, creating new harmonics and distortion. The sound of saturated audio is usually much warmer and more pleasant sounding than digitally distorted audio.

Bit–reducing or crushing is a different form of distortion which is exclusive to digital. A bit reducer will do exactly what it says and reduces the bit-depth of audio which causes the new signal to be less accurate when decoded and will include new harmonics which create a distortion effect.

In Logic X you actually have the ability to create your own guitar tones using emulated – digitally recreated – amplifiers and pedals with the effects that have been discussed and more. The plugin that allows you to build amplifier stacks within Logic is called Amp Designer and is found here:

The programme allows you to combine amplifier heads and cabinets, as well as choose which microphone the amp stack will be ‘recorded’ with. You’re also able to change the position of the microphone, having it closer for a dry recording or further away for a wetter sounding recording. 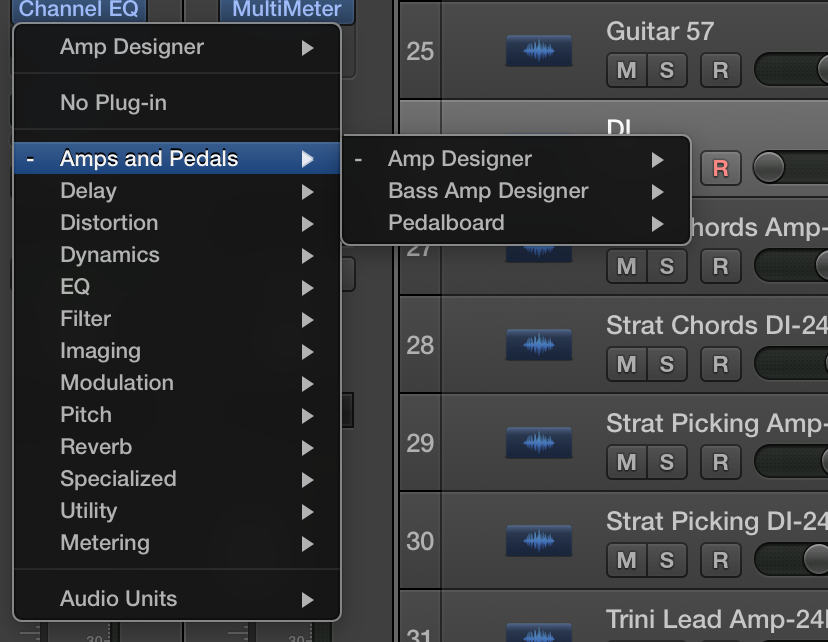 Unless you know which sound you’re looking for all ready, you’ll need to play around with different components and settings until you find a tone you like.

Thank you for reading, I hope you now understand the different audio effects and will be mastering the studio in no time!

The next addition will be looking at delays and reverberation.