How To Analyse Lyrics Like A Pro: The Ultimate Guide

Knowing how to analyse lyrics is complex. As musicians, we all recognise musical anchor points – tempo, harmony, melody, instrumentation, etc. However, the musicality of a song is only part of the picture, and lyrics are often the real soul of a track.

Song lyric analysis is something of a dark art in itself. Whole books on how to analyse lyrics have been written, but here, we will summarise the main things to think about when examining lyrical content.

In this article we will convey how to analyse lyrics in a meaningful and constructive way, that will ultimately inform your own songwriting.

Sound good to you? Let’s get started.

First, you need to think about who is singing the song. Is it auto-biographical? 1st or 3rd person? Is it a narrative or a statement? What themes are used?

Consider a song like ‘Romeo and Juliet’ by Dire Straits. This is a narrative theme, that interestingly combines an old love story with a modern-day idiom. It does this with the ‘voice’ of the lyrics which is almost a Shakespearean chorus:

Next, you need to think about the context. When was the song written? Where was it written? What is the social, political, and economic context?

Today, the Sex Pistols’ ‘God Save the Queen’ doesn’t feel particularly outrageous. However, in 1977, the song (strategically released to coincide with the Queen’s silver jubilee) sparked huge controversy.

It did this by declaring that the British monarchy had ‘no future’ at a time when royal popularity was quite high in many respects, but, against a stark backdrop of high unemployment. The widening economic disparity between the working, upper classes and labour disputes brewed across a number of industries.

In addition, the major broadcasters held something of a monopoly in terms of cultural stewardship. Which resulted in an underrepresentation of real youth culture.

Two of the top 5 selling singles of the 70s were ‘You’re The One That I Want’ and ‘Summer Nights’ from the movie Grease. With edgier content filtered away from major exposure.

The chart reporting for May 1977 suggests that the real chart position for ‘God Save the Queen’ may well have been number 1. However, many, including the BBC, reported it as number 2 with a couple of publications just listing the chart position as a blank space. Rather than naming the song – in an effort to censor it.

Auteur theory is often applied to filmmakers, but is equally applicable to musicians.

How does an artist’s individual style influence the overall picture? Well, when considering authenticity and auteurship, it’s really a case of thinking in terms of how the subject matter is engaged with. As well as on what levels, and how the distinctive style of the writer influences those lyrics.

A prime example is Elbow.

As a Manchester band, their songs are steeped in the breath of the city and the language they use captures it perfectly:

There are a number of poetic tools a writer can employ to affect the rhythm and delivery of a line, including alliteration, assonance, and rhyme.

There are also devices such as swearing to communicate a feeling, stuttering to add rhythm or suspense, and writing with hidden meaning.

A song could have an easily identifiable subject matter on face value, but really have a secret alternative meaning. For example, The Darkness’ hit “Growing on Me”:

I can’t get rid of you
Don’t know what to do
I don’t even know who is growing on who
‘Cause everywhere I go you’re there
Can’t get you out of my hair
Can’t pretend that I don’t care, it’s not fair

At first glance, it is a simple song about falling in love, but the real meaning is actually the story of the protagonist’s genital warts.

With all of that being said, now we will drill a little deeper, and show how these trains of thought can be applied to deeper lyric analysis.

How to analyse rap lyrics is almost an academic discipline in its own right – and there are usually a lot of lyrics in rap to read into.

NWA’s ‘F*ck Tha Police’ from their album ‘Straight Outta Compton’ was an incredibly controversial hit when it was released in 1988.

It prompted an almost universal ban across radio stations with only Australia’s Triple J giving the record any air time, before the Australian Broadcasting Corporation enforced a ban on the song in 1989.

‘F*ck Tha Police’ is a protest song that shines a spotlight on police brutality and racial profiling in the US. Particularly in the band’s hometown of Compton, LA.

Themes of systemic racism and societal inequality run through the whole album. NWA’s testimony of growing up in one of the poorest areas in LA is a story of  gang violence, drugs, and poverty. In a judicial system that only serves to force young black people into crime and repeat offending.

The context of this song is anger at the inherent racism throughout the justice system.

It is speaking from the perspective of those who have suffered injustice, at a time when those demographics were severely under-represented in the media and the international conversation.

If you’re not familiar with the lyrics, the song opens with the opening remarks of a noisy courtroom. With Dr Dre prefacing the song by introducing that NWA are bringing evidence in a legal case of the band against the police department:

“Right about now NWA court is in full effect
Judge Dre presiding in the case of NWA versus the police department.
Prosecuting attorneys are MC Ren, Ice Cube and Eazy mother*ckin’ E
Order, order, order, Ice Cube take the mother*ckin’ stand
Do you swear to tell the truth the whole truth
And nothin’ but the truth so help your black ass?
You goddamn right
Well, won’t you tell everybody what the f*ck you gotta say?”

Looking At The Lines

Looking more specifically at the lyrical devices used here – the opening lines are satirical. However, these are key lines in establishing the mood of the song, and in themselves, they create multiple layers of meaning.

The first two lines are very formal in their language to reflect the kind of words used in courtrooms. This hints at the idea that the judicial system was weaponised against black people. The band is familiar with the language of that system because of their experiences of being victims of it.

It also belies a sense of authority. By taking the role of the judge, Dr Dre re-balances the playing field. He then goes on to ask Ice Cube to take the stand and swear to tell “the truth, the whole truth and nothin’ but the truth so help your black ass?”

The use of language here is ingenious. By taking the majority of the lines directly from normal courtroom parlance, NWA establishes an authority.

By adding their own twists on the language, they go a step further and effectively bring the police department into a courtroom stacked against them as the defendants. Putting the police as a concept into the shoes of a black man in 1980s LA.

The opening lines also serve to underpin the theme that NWA has legitimate complaints against the police. For which they can submit evidence, and it opens the door for Ice Cube, MC Ren and Easy E to bring their testimonies for the listener to consider.

He opens by highlighting his anger at the inequality reinforced by the police and speaks from a position of having been ignored. Then, he follows up that he has been denied an equal place in society because of the colour of his skin. Immediately justifying his (and many others’) distrust of the police.

Ice Cube goes on to say:

“F*ckin with me ’cause I’m a teenager
With a little bit of gold and a pager
Searchin’ my car, lookin’ for the product
Thinkin’ every n***a is sellin’ narcotics”

Ice Cube is a master of assonance and rhyme to convey a broader meaning. Whilst “teenager” and “pager” rhyme directly, “underground” and “brown” and “product” and “narcotics” sound similar because of the stressed vowels in the words. Which gives him the scope to cast a wider net lyrically and go to more unpredictable places.

The other thing we like about these four lines, is how concisely Cube explains that he is a young man who has enough money to buy something as simple as a pager and a necklace, but is still the victim of unwarranted police searches.

He also manages to perfectly establish himself as a part of his culture by referring to drugs by their street name ‘product’ and instantly contrasting that to the term the police would use to prosecute him, the sale of ‘narcotics’.

Finally, when it comes to how to analyse lyrics, the chorus is super important. The chorus utilises arguably the most ubiquitous technique in songwriting – repetition.

It is the repetition of a phrase that incorporates one of the most powerful swear words in the English language. Despite its brevity, the phrase is a shocking concept (especially for the white middle classes of the US).

It is enforced by an empowering attitude and a call to action for society to end the racism endemic in its systems.

So there you have it! That was our guide on how to analyse lyrics.

Lyric analysis can be quite a time-consuming activity – there’s a lot of research to be done and lots of things to consider when placing lyrics into their proper context.

However, we think knowing how to analyse lyrics is a very useful exercise both for music fans and for songwriters. It allows you to really understand what the artists are trying to convey, and you build a much deeper appreciation for lyrics as an art form.

Furthermore, if you really want to sink your teeth into something, then Bob Dylan’s catalogue is definitely worth spending a lot of time with.

We hope that you enjoyed this article about how to analyse lyrics. Like any skill writing great lyrics takes time and dedication. Keep writing, share with other musicians, and be inspired by the world around you.

If you are looking for a platform that offers everything you need in one place, why not try Music Gateway? We can help with promoting your music, improving your streaming presence and providing Sync opportunities. Try it out for free today by signing up or clicking the button below. 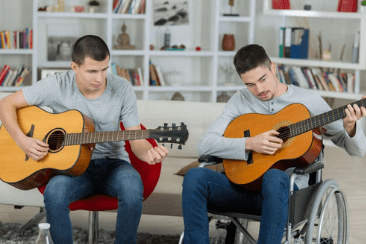 Art is one of the defining characteristics of what it means to be human. It’s no surprise that engaging in the creative arts helps us to express and process... 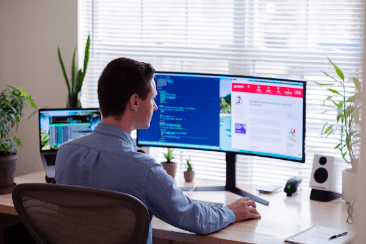 As musicians, our income tends to come from a variety of different streams. Gig fees, record sales (physical and digital) and royalties all make up slices... 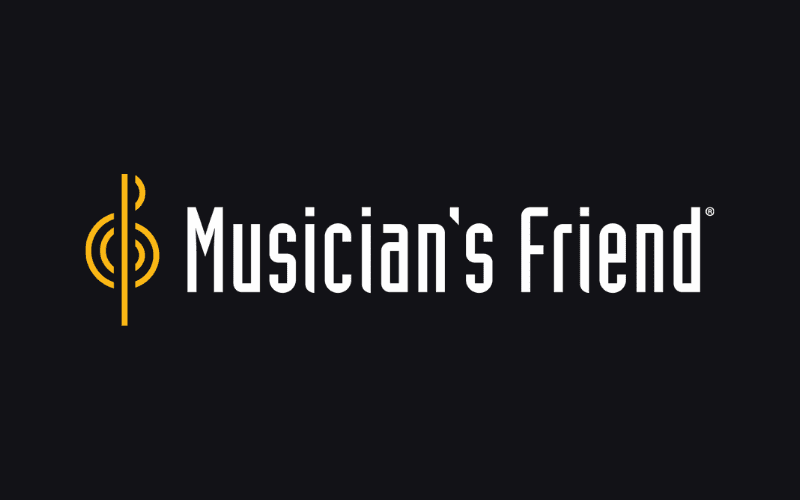 If you’re based in the US, you have probably at some point spent a few hours scrolling through the Musicians Friend online store. I mean, if we know one...