Does Apple Music bring anything new to the streaming table?

A lot of noise has been made over Taylor Swift ‘conquering’ Apple Music in one fell tweet (and a Tumblr post), although some are calling foul and labeling it a well-executed PR move. But there is a grander picture to be considered here, which is the very notion of streaming music in 2015, and the setup that is currently in place. It is worth considering, in a market which already has several dominant players, whether Apple Music is bringing anything new to the streaming table, and perhaps more importantly whether the streaming model is still viable to artists.

Firstly, to recap what Apple Music is. Put simply, the service is dressing itself up to be a contender towards Spotify, Pandora, Google Play and other streaming outlets. It is looking to streamline the music listening experience, taking in various factions including song streaming itself, music videos, programmed playlists, a 24-hour radio station headed by BBC Radio 1’s Zane Lowe, and an intriguing branch referred to as Connect, which is a cross between Facebook and Soundcloud, although it will also allow for Connect to post across to other social media.

Sounds like a tall order, but these are areas that Apple are no stranger to: music videos are already a part of the iTunes Store; radio has been an integrated feature since the beginning; and who remembers Ping, Apple’s last attempt at a social networking software, which closed after two years of underwhelming response?

Lets Start with the Positive’s

One of the main bonuses of Apple Music is ease of access. Apple technology is ubiquitous these days, so there is already a captive audience to test drive the upcoming app. I am also assuming that there will be some form of offline listening available in the vein of Spotify, because signal is still not yet omnipresent in this day and age. The other advantage of a captive audience is that it requires a reduced level of advertising; in fact, it would not overly surprise me if Apple ‘do a U2’ and secretly install the app on every iPhone and iPad on the launch date, set as 30th June.

The other main plus point of Apple Music is its integration with other services. The link between listening to an album via Apple Music, and then being able to purchase it via the iTunes store, will no doubt encourage download sales (not that they need encouraging, given how much they’ve been climbing!). Secondly, Connect lays out a groundwork of flexibility for the artist regarding their music: “They can put it up on Connect for free if they want to, or they can put it up behind the [subscription] paywall, or they can make it available on the iTunes Store for sale. They’re in control of their music and how they want to distribute it,” said Eddy Cue, Apple’s senior VP of Internet Software and Services. This is, of course, assuming the artist understands the business side of what works best for their music; some styles inevitably lend themselves better to streaming, some to download, and it requires someone with business smarts to establish which is appropriate for the artist in question.

Apple Music’s price currently stands at £9.99 per month, or £14.99 [2] per family of six per month. Cue reasons this as roughly the price of an album a month, although it seems more likely that it’s the price set by the competition; Spotify, Google Play, Qobuz, Deezer and Rdio all charge the same amount per person [3].

As alluded to in the introduction, there’s not an insignificant number of people who perceive Taylor Swift’s post, defending the artists who were to lose out on three months’ worth of royalties during the trial period, as an elaborate PR move. Apple Music is due to launch tomorrow, so ask yourself: what’s going to be fresh in people’s mind? Could it possibly be the fact that Apple Music have now announced they will be paying the artists’ royalties – which, as David Hall of Handshake, Inc. points out, are ‘micropennies’ [4] for the vast majority of music makers on the service? It could easily be argued that this was a method of swaying over those on the fence, who use other services and needed that final push into Apple Music territory. And that’s not including the news that Swift’s latest album will be available through Apple Music, after all [5].

The payment issue doesn’t stop there: it was recently announced that Apple Music plans to pay out 71.5% of its earnings to the labels and artists, and while this may be well-intentioned, there are two whopping great spanners in the works. Firstly, there has been a long-standing history of label agreements signed, that result in a small sliver of the money actually going to the artist, due to the slices that go to the record label, the PR, the recording engineer and anyone else involved in the album cycle. Secondly, according to a leaked contract the percentage is actually 58.5%, although this has been confusingly rebuked by Apple. More on that here [6]. 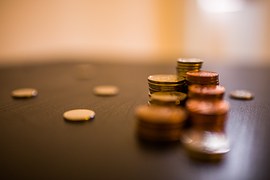 To add insult to injury, bands cannot submit music directly to Apple: they must go through a label, distributor or aggregator. So essentially, there will always be a cut of the pennies taken from the revenue to go somewhere else, which leaves DIY and unsigned bands stranded even if they wanted to get their music onto this service, and if not necessarily reap the financial rewards but at least take the chance for exposure. If bands could control their own digital distribution, or embrace the likes of Bandcamp, they’d stand to take a much larger cut of the profit from their digital sales.

Here’s where things start to get a little sinister

Apple has already started making behind the scenes moves to try and secure a strong hold on the market, not least with exclusive deals for music. As The Guardian comments, “Apple is no more able to influence the music industry economics of how labels and publishers pass on payouts to performers and songwriters than Spotify is, although it can pay established artists lucrative advances to grant it exclusivity on their new releases.” The new Drake album may well be available solely through Apple Music, as the man seems so enthusiastic about the project [7], and that will drive traffic away from other streaming sites. They have also allegedly been pressuring labels to reduce Spotify’s free service, undercutting the competition to provide that final push for people undecided about whether to pay for streaming music.

That said, however big Apple Music may be in the market, it is still a cog in the chain. We must consider streaming music as a whole, a system which is showing itself as unsustainable for everyone except the established services. It’s been formulated so that the service profits much more than the artists on the service; the power has been skewed towards a handful of powerful individuals, and independent artists and labels are getting the sharp end of the stick. Consider how many artists will be on Apple Music. You are not competing for listeners against a handful of other artists; you are competing against thousands of other artists, some of whom will have much bigger promotion campaigns than yourself. The small labels, like Sargent House, The Flenser, Basick Records, they don’t stand a chance against Universal or Sony. Your local eccentric math rock band will make a droplet compared to the likes of Rihanna and Drake.

It will take a very long time for independent artists to see a reasonable amount of money from this style of streaming. Big-name artists already are running into issues; the fact that Pharrell Williams made just $6300 from the plays of super-hit “Happy” on Pandora [8] proves my point, or just check out these royalty cheques from Spotify. [9] The time it takes for streaming sales to outstrip download sales is also for consideration. The Wall Street Journal had an interesting article mentioning that [10], discussing but not naming the artists who no doubt are already in the public conscience, and the time it took lasted months and months. For independent artists, the recuperation time could outlast their own career.

The odds of the streaming model are not stacked in the favor of independent artists and labels, this much is clear, but Apple Music are taking it a step further, in a bid to sweep the competition out from under their feet. They’re increasing their own hold on the music industry by tightening connections with the major labels, and turning the experience of music listening into a commodity and a competition. If this is revolutionising the music listening experience, it is not for the better.

Looking at the bigger picture

Music itself has been devalued, and part of the blame lies at the streaming services’ feet. It speaks volumes that companies like Apple consistently refer to their target audience as users. Not listeners, but users. These services are vying for the attention of users’ wallets, not their ears. To quote Geoff Taylor, chief executive of BPI: “It is likely to deliver a fantastic experience for music fans, helping to drive consumer awareness and appreciation of premium music subscription as something that enhances your life.” That is not the language of people invested in music, of people who have the artists’ best interests at heart.

As it stands, the new generation of music listeners will grow up assuming that the history of recorded music is available for just a tenner a month, and that because music is pumped out at a rate of knots each year, musicians can afford to keep doing so. Apple’s new streaming service is encouraging this destructive behaviour. We cannot hope that the ‘streaming problem’ is going to be ‘fixed’, because the people in charge don’t see a problem. There may well be a solution, but Apple Music is not it.

[6] Apple responds we pay 71.5% of Streaming Revenue back to artists