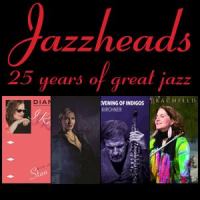 Jazzheads is an independent record label specializing in all styles of improvised music. Jazzheads prides itself in releasing recordings that take great care in the recording process in order to achieve a high level of musical integrity.

The company is headed by award winning composer/pianist, Randy Klein.

Randy Klein is a prolific musical theater composer with a number of shows produced in the United States and Europe. His musical theater works include Move!, a dance musical commissioned by the Royal Theatre Carre', Amsterdam (premiered April, 1992); I Don't Do Club Dates, staged reading at the Victory Theater September, 1991 by the National Musical Theater Network and at the John Harms Center for the Arts, Englewood, NJ, January 1994; and Capture The Moon, based on the Eastern European folklore stories of the Wise Men of Chelm. In 1989, I Don't Do Club Dates earned Randy a BMI Foundation grant for artistic promise in theater composition; Falling Apart, a chamber musical utilizing elements of both musical theater and the jazz concert; Bucky And His Friends, a full-length contemporary vaudeville show for stage, video and CD; Flambe’ Dreams (formerly) The Thing About Joe, an original musical about a man who dreams of becoming a great maitre'd. Flambe Dreams has been performed in readings and workshops from 2006-present at: 2012 New York Musical Theatre Festival (NYMF), The BMI Musical Theatre Workshop, BMI Showcase , Musical Mondays at the Jerry Orbach Theatre, TRU readings , Groundup Productions, and The York Theatre. Ever Happily After – 2013 New York Musical Theatre (NYMF). Music for Fancy Nancy ‘Splendiferous’ Christmas at the Vital Musical Theatre, NYC 2014 – 2016, Music for Twinkle Tames A Dragon at the Vital Musical Theatre, NYC 2016 – 2017. He is currently working on Black Swan Blues (based on Swan Lake).

His documentary film scores include: National Emmy winner Free To Dance (PBS Great Performances) and National Emmy winner Beyond Tara – The Extraordinary Life Of Hattie McDaniel (American Movie Classics) and Richard Wright – Black Boy (PBS/BBC production). His music can be heard at the Burial Ground Museum in lower Manhattan and at the Civil Rights Museum in Greensboro, NC.