Do They Know It’s Christmas? Apparently Not

It has been 30 years since the release of the original Band Aid, which sold over three million copies and raised £8 million to help fight famine in Ethiopia. This year’s incarnation of the charity single was just released today and deals with the Ebola crisis in Guinea, Sierra Leone and Liberia. Should you do your part to support the cause and buy the single? On one hand you will be donating to a good cause, but on the other you don’t get to choose who your donation goes to, or what it gets used for. The single does raise awareness about a crisis that people are suffering from, but does it represent it the right way? Are you supporting a worthy cause or just sponsoring a vanity project?

(Disclaimer: This article reflects the views of the author, not of Music Gateway)

Is It Christmas for Everyone?

The first problem that this years Band Aid single faces is the song’s title and lyrics. Both Guinea and Sierra Leone are predominantly Muslim, Guinea with 85 percent of the population and Sierra Leone with 70 percent of the population. Liberia is 85 percent Christian and around 12 percent Muslim. Dedicating a Christmas song to an area where most people are Muslim is not a good idea. While Sierra Leone is quite a tolerant place and known for Muslims and Christians getting along peacefully, there have been clashes in Guinea between different ethnic and religious groups. While giving the single and donation a Christian connotation to it might not cause any conflicts, there is still a chance that it could do, so why take the risk? 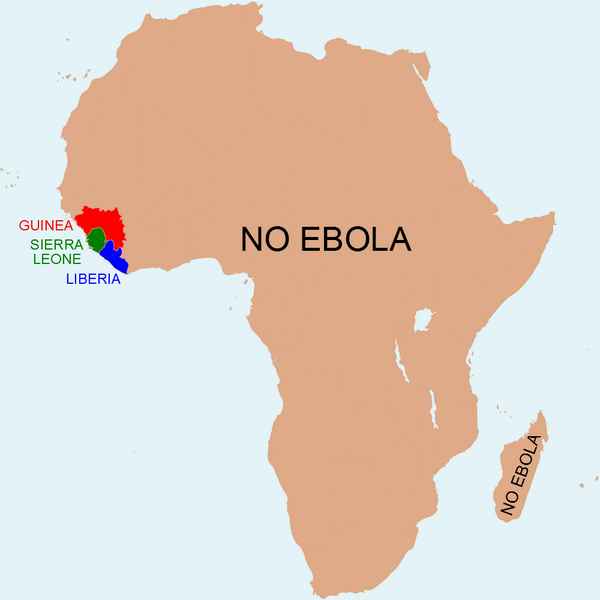 A map showing the countries affected by Ebola

As well as not considering religious sentiments, the lyrics also have the line “No peace and joy this Christmas in West Africa.”. Ebola is not in the whole region of West Africa, but only in Guinea, Sierra Leone and Liberia. Spreading false information like this harms the whole region, as travel and tourism to the area falls dramatically, while stigmatizing people from the area. Recently there has been a rise in people from West Africa, as well as people from Africa in general, being discriminated against because of the fear of Ebola spreading from their countries, despite them coming from Ebola free countries. One example is in Cornwall where a Nigerian man was banned from his security guard job for three weeks after he returned from a trip back home, due to his colleagues’ fears that he had Ebola. If you are given a huge platform to raise awareness about a cause, it is imperative that you get the facts right to avoid misrepresentation of the crisis or spreading false information.

Who Gets the Spotlight?

Another problem with Band Aid is that it seems to be more about the artist, not the cause. Bob Geldof’s career skyrocketed because of the original Band Aid. A year after recording the single he organized Live Aid, which was probably one of the biggest concerts the world has seen at the time. Ironically, that’s what is bad about it. Instead of the main focus being on the cause that funds are being raised for, the main focus is on entertainment and the artists who are performing. It becomes all about what they want to happen and what they want the money to be used for. Instead of having an NGO or others making an informed decision over where the donations should go, we have pop stars that are not affected by the crisis speaking for them and the victims. Blur frontman Damon Albarn is critical of Band Aid and said:

“Our perspective and our idea of what helps and our idea what’s wrong and right are not necessarily shared by other cultures. There are problems with our idea of charity, especially these things that suddenly balloon out of nothing and then create a media frenzy where some of that essential communication is lost and it starts to feel like it’s a process where if you give money you solve the problem, and really sometimes giving money creates another problem.” 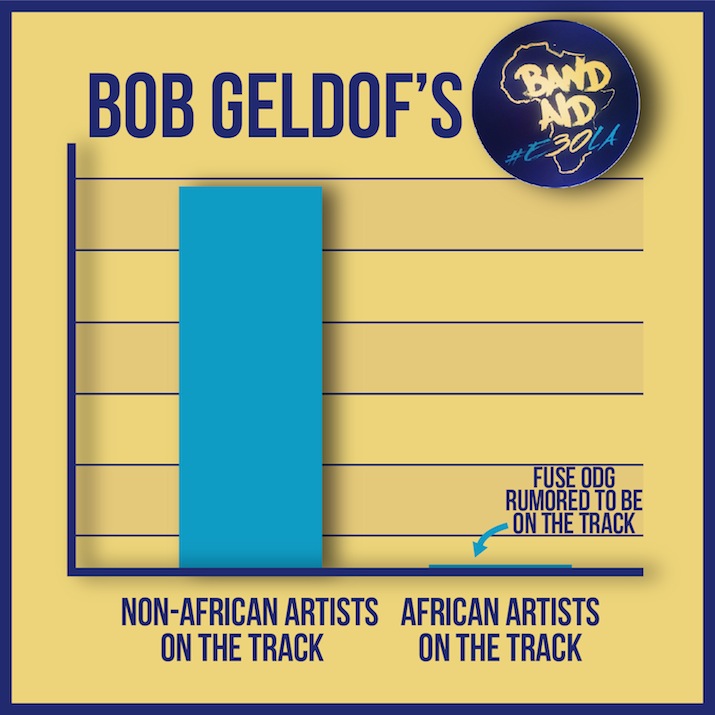 Graph showing the representation of African artists on the track

Instead of British artists making songs for the countries affected by Ebola, why don’t we have artists from those countries making music? That way we can see what is going on through the eyes of the people affected, as well as learn a thing or two about their music and culture. It would be a refreshing change from hearing a 30 year old song sung by people we hear and see everyday on the radio and tv. Instead of speaking for others, we should give them the opportunity and platform to speak for themselves.

Where Does Your Money Go?

One final problem of Band Aid is how it changes the face of donations and charities. Instead of contributing to causes all year it gives the impression that all you have to do to clear your conscience and be a good Samaritan is spend £1 on a Christmas single. As well as that, you don’t know what that £1 is going on. There have been stories in the past about money that was raised by Band Aid and Live Aid were used to buy weapons in Ethiopia. In 2010 the BBC made a documentary claiming that some of the money that was donated to buy food in Ethiopia was used by rebels to buy weapons to help their revolution against the current government. This was backed up by members of the armed struggle as well as the CIA. Afterwards the Daily Mail published a similar story, but the controversy ended after the BBC was forced to apologize for misleading viewers after a complaint from Bob Geldof and the Band Aid Trust. 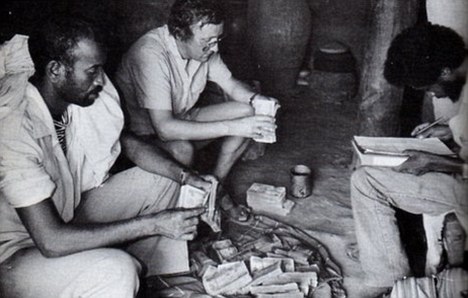 Donations from Band Aid allegedly falling into the hands of rebels

Regardless of whether money from Band Aid was used to buy weapons, it is still a valid point that you need to be careful who you donate money to. After the tsunami in 2004 that devastated parts of Asia, there were a lot of Christian charities that went to areas in need, with the purpose of proselyting as well as giving aid. Some groups gave out Bibles as well as food, and one charity even tried to fly hundreds of local orphans to Christian orphanages in the US! While not all religious charities are bad, not all secular charities are good either. The only way you will know that your money is going to a good cause is to do the research yourself and donate to a charity of your choice, not to the guy on stage screaming “Give us your fucking money!”

While projects like Band Aid do raise awareness about different causes and disasters around the world, we really need to question ourselves if the only way we find out about these different causes and disasters is through music. You have to be living under a rock if you don’t know what Ebola is in this day and age. The proper solution to getting people to donate to charity is not to shame them for the money and do it for them, but to encourage them to be more proactive for themselves. It’s so much easier to watch a short video on the X Factor and then spend £1 on a single than it is to do your own research on what is actually going on and learning the raw, gritty truth. Instead of listening to a happy clappy Christmas single sung by people who have probably never been to Sierra Leone, Guinea and Liberia, why not listen to artists who are actually from there, like this song from Liberia. Songs like this are actually listened to in Ebola struck nations, not Christmas singles from another continent. There is no denying that Band Aid and other similar causes do generate a lot of money that goes to charity, but you do not need them to make a difference. You have the power to do it all yourself. 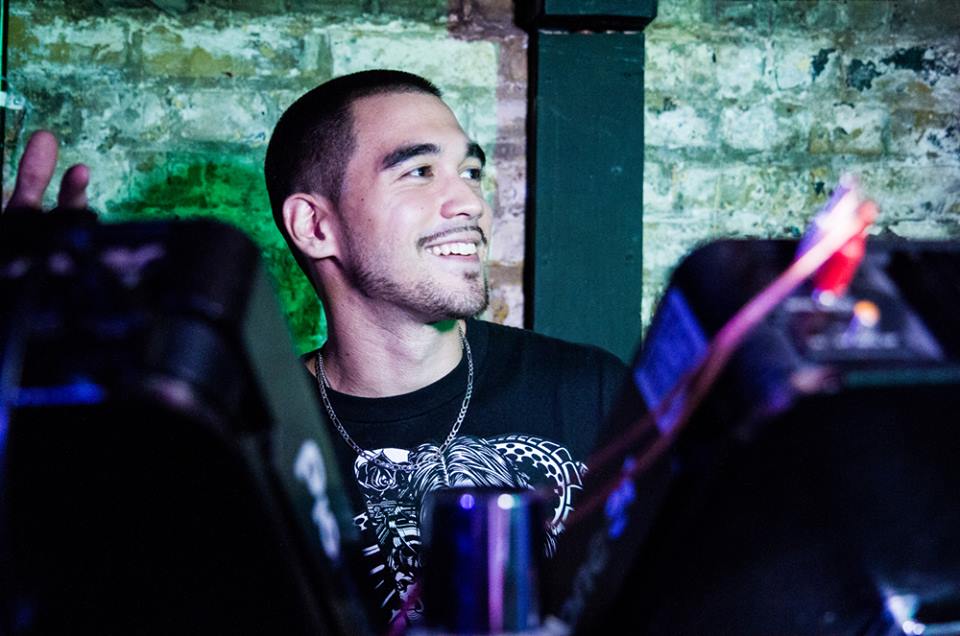 Although Bob Geldof may have gotten it wrong this time, it’s still incredible that he’s managed to bring so many artists together! Have you ever thought about collaborating with other writers? Why not give it a go with Music Gateway?